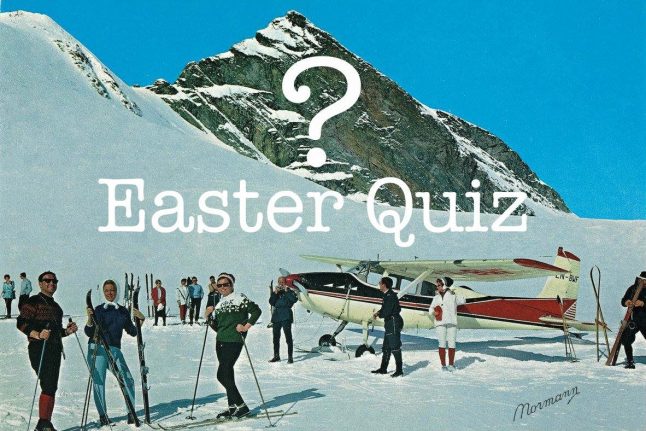 1. Nothing says Easter in Norway like a trip to the mountains, and Jotunheimen, as the country's largest mountainous area, is a popular destination this time of year. Jotunheimen National Park, established in 1980, boasts more than 250 peaks above 1,900m (6,000ft), including Norway's (and Scandinavia's) highest mountain, which culminates at 2,469m (8,100ft). What is it called?

2. Many Norwegian head for their own private cabins at Easter, but many others also opt to use cabins belonging to the Norwegian Trekking Association (DNT), which has a great network of both serviced and unserviced 'hytter' throughout Norway. But do you know exactly how many cabins DNT operates?
A. 300
B. 500
C. 850

3. These two graphic artists, a man and wife team, work together in Oslo. They both studied at Statens Håndeverks – og Kunstindustriskole (the Norwegian National Academy of Crafts and Art Industry) and have long collaborated on a series of colour woodcuts. Humor and irony are central to their work. This piece is entitled 'Easter Morning'. Can you name the artists?

© All rights reserved
4. What the weather will be like over the holiday is a popular conversation topic in the days leading up to Easter. Norway's weather forescast website, yr.no, is the world's fifth largest. Only The Weather Channel, AccuWeather, Weather Underground and Yahoo Weather are bigger. But do you know when yr.no was launched? (By the way, if the forecast is not good, don't despair, just remember this good old Norwegian saying: There is no bad weather, only bad clothing.)

Screenshot: yr.no
5. The Norwegian Mountain Code ('Fjellvettreglene' in Norwegian) was introduced in the early 1950s after a number of deadly accidents during Easter 1950, and has since become part of the Norwegian cultural heritage. The nine rules, which aim to help people keep safe in the mountains, were updated in 2016, to reflect the changing knowledge of (and equipment used by) Norwegians. Do you know what rule #1 is?

6. It might look, and taste, like a KitKat, but god forbid you call it that in front of Ole Martin! To the average Norwegian, Kvikk Lunsj is much more than a simple chocolate bar wrapped in reggae colours, it's a quick fix nostalgia boost, a one-way ticket back to their childhood and happy memories of sunny ski trips of yore. First launched in the 1930s, Kvikk Lunsj is as popular as ever today: during Easter Norwegians work their way through a whopping 16-17 million Kvikk Lunsj bars. Yes, that's a substantial amount of chocolate you might say! But how much of the annual consumption?
A. one-tenth
B. a third
C. 80% Photo: Freia
7. The Sami have always gathered over the Easter holiday. Everyone met and weddings, confirmations and christenings usually took place that week. After partaking in festivities, and competing in the much loved reindeer-races, they parted to start moving the reindeer herds. This tradition has endured. Today the Sami Easter Festival is a mix of old and new, and includes music, theatre, exhibitions, duodji (traditional Sami handicrafts), art, cinema and lassoing, as well as a snow-scooter cross and a joik singing showdown. There is no doubt that the reindeer-racing remains the highlight of the festival, though. In which Finnmark town does the Sami Festival take place?
Photo: Downhill Bluegrass Band

8. 'Påskekrim' (Easter crime fiction) has a long tradition in Norway, and no self-respecting Norwegian would dream of heading to the mountains without a good thriller or two. Many Norwegian crime writers have been translated into English, and have enjoyed success abroad. But let's see if you can guess which particular novel this description applies to: A trip on the Bergen Railway, interrupted by a snow storm. The detective in this story finds herself stuck in a Norwegian mountain hotel, with a murderer on the loose. Who wrote this book, and what's the name of the hotel that lent it its title?

9. Of course not all Norwegians leave town for Easter. Some decide to stay put over the holiday. Oslo can feel like a ghost town that time of year, but it also means you can have the city pretty much to yourself. While most shops are closed, most cinemas remain open, and going to the movies to see a thriller has also become a tradition for many. The largest cinema in Oslo also happens to be the largest in Norway and Scandinavia – and the largest THX cinema in the world! It is distinguished by its huge spherical dome. Do you know its name?
10. Finally… if there is one thing most Norwegians agree on, it's that nothing beats sitting in the spring sunshine with a cold beer in your hand, feeling the sun's rays on your face, be it after a trip to the mountains, or one to the cinema. There is even a word for that in the Norwegian language, 'drinking a beer outdoors'. Yes there is! Do you know what it is?
Happy Easter!
ANSWERS
1. Galdhøpiggen
2. B. 500
3. Gunhild Vegge & Lasse Kolsrud
4. 1980
5. Plan your trip and inform others about the route you have selected.
6. B. a third
7. Kautokeino
8. Finse 1222
9. Colosseum Kino
10. Utepils
HOW DID YOU DO?
9-10 right: Great job! You are a real Norwegian Easter bunny!
5-8 right: Not bad, you know your Kvikk Lunsj from your KitKat, and (presumably) your utepils and your utedo too.
1-4 right: What went wrong? Apply rule #8 of the Norwegian Mountain Code and try again!