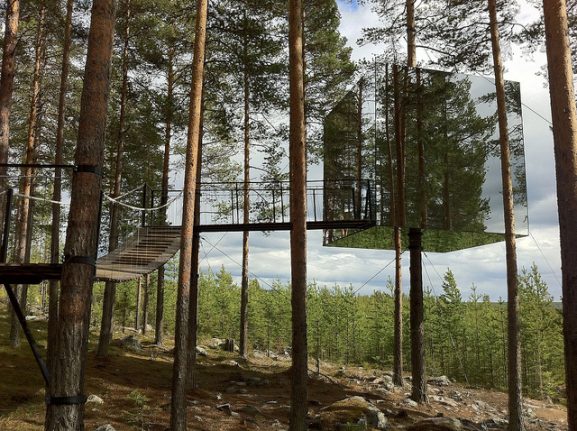 We wouldn’t be surprised if a Disney executive was inspired by a visit to Jukkasjärvi, 200 kilometres north of the Arctic Circle, before the storyboard for ‘Frozen’ was complete. Many of the 55 ice rooms feel far more palace-like than your average hotel suite.

Swedish design is all about making use of old resources in new, creative ways – like 5,000 tonnes of ice, for instance. Each year thousands of giant ice blocks are harvested from the Torne River and used to build the impressive structure. The water from Torne River is some of the cleanest in the world, and since it freezes as it flows, the ice it creates is remarkably smooth, clear, and free of airbubbles. Each year selected artists from around the world are invited to sculpt unique suites which transport guests to a winter wonderland unlike anything they’ve ever dreamed of. But in true Swedish style, the art is also democratic and available for all. There are no doors to the rooms, just curtains, and while you can pay to spend a night there, during the day the rooms are open for all to view.

The Icehotel also embodies another important principle of Swedish design: sustainability. The new Icehotel 365, a separate building operated all year-round, runs on solar power – an environmentally-friendly way to maintain the refrigerator-like interior even under the midnight sun.

What child hasn’t dreamed of having an epic treehouse, where they can look out across the world below while towering above the stress and obligations of everyday life?

In Sweden it’s more than a childhood fantasy – it’s a reality. About three hours south of the Icehotel, in Harads, you’ll find the Treehotel – a place where nature, modern Scandinavian design, and ecological values beautifully mesh.

Each unique treeroom is suspended 4 to 6 metres above ground, and has been carefully designed to have as little environmental impact as possible. No trees were chopped down while building: the rooms hover carefully in the branches of the living, thriving pines. Perhaps the most famous of the seven cabins is the one which also camouflages itself into the surrounding forest: the magnificent Mirrorcube. Then there’s the Bird’s Nest, complete with a retractable ladder so you can truly escape into nature, and the magnificent 7th Room, with views of the northern lights and a massive net “patio” where you can – quite literally – hang out.

Now let’s journey another 650 kilometres southwest, to Åre. Perhaps you’ve heard of it  – Åre is one of Sweden’s most popular areas for skiing.

But it’s also home to the Copperhill Mountain Lodge, nestled into the slopes of Mount Förberget. The lodge preserves the tree line and was carefully planned to blend into the natural topography of the area.

World-renowned architect Peter Bohlin is perhaps best known for designing a house for Bill Gates – as well as a dozen or so Apple stores. The lodge’s impressive angular facade is a perfect complement to the craggy mountainside, and the building features breath-taking high ceilings and beautiful untreated timber.

Noteworthy Swedish design is nothing new. It’s a tradition centuries old. And its humble, historical roots are beautifully embodied in the heartwarming home of famous Swedish painter and illustrator Carl Larsson.

Larsson is well-known for his idyllic watercolors of Swedish home life and interior design, and his own home – Lilla Hyttnäs – has become one of the most famous artist’s homes in the world. You could say it’s the home of one of Sweden’s first celebrities! The tiny cottage in Sundborn, Dalarna, is painted in the classic “Falun red” colour which comes from the area, and has now become a global icon of Swedish design tradition.

The interior is well-preserved and offers insight into what life was like for a family in mid-19th century Sweden. Modern minimalism is nowhere to be seen – the house is overflowing with quaint cushions, dainty flourishes, innumerable illustrations, patterned rugs and table cloths, in a cacophony of colour. Next, venture into the stunning Stockholm archipelago, with more than 3,000 islands. But we’re interested in one in particular…

Since 2012, the island of Värmdö has hosted a unique venue for art and events. The name – Artipelag – was inspired by the meeting of art, activities, and the archipelago. You can drive there – but even better is the boat trip from central Stockholm.

The venue hosts a number of show-stopping exhibitions, but the building itself is worth your oohs and ahs.  The art hall is designed around the island’s landscape, with a suspended boardwalk leading from the dock to the building, and a massive, protrusive boulder preserved in the dining hall for kids to climb on. The entire building oozes Swedishness: it has its own vegetable garden on the roof and its own bee farm, and all of the furniture in the building was designed exclusively for Artipelag.

In addition to featuring famous Swedish designer exhibits, the hall has a gift shop where you can buy the best of Swedish design – from foldable picnic cups to unusual vases. The Royal College of Music, built by AIX Arkitekter, in central Stockholm is another prime example of democratic design: in Sweden, art is for everyone.

The brand new campus is open to the public, and it’s a beautiful place to spend a lazy afternoon, for students, Stockholmers, and tourists alike.

It’s also a prime example of art meets tech: two areas of Swedish expertise. Acoustics are critical at the school, which is way the building has 82 music rooms which were built without contact with the main frame of the building – they rest on rubber blocks instead. The building is an extension of the rhythm of the city, reflecting its surroundings and beckoning to visitors with its glimmering glass-and-brass facade. Even the balconies inside the entry hall are worth noting –they swell outwards intermittently, like a crescendo in a concert symphony. It’s an architectural masterpiece – and a new cultural hub in the capital of Scandinavia.

An hour or so west of Stockholm and slightly south of Örebro, you’ll find the “art-town” of Kumla.

On top of the hill known as Kvarntorpshögen you’ll find what has been called Sweden’s “most peculiar” sculpture exhibit, featuring the work of the country’s artistic crème de la crème. It’s hard to explain what’s so odd about the place…you kind of have to see it to believe it.

And it begs the classic question: what is art? A free-standing metal balcony symbolic of a bygone lifestyle? Egyptian burial statues teetering precariously on steel beams above green Swedish plains? A giant sheet-metal bowl you can walk inside and see only the sky?

It’s up to you – visitors are free to wander through the art any time of day or night, so go and draw your own conclusions.

Now let’s leave Sweden for a moment – kind of – for the micronation of Ladonia.

Actually, no, it’s definitely a part of Sweden, no matter what the famous-and-controversial artist Lars Vilks says. And it’s where you can find the beautiful but peculiar driftwood “buildings” or sculptures known as Nimis, challenging norms – even those of the government – and offering wanderers a place to be part of something truly unique. But as its existence – on a nature reserve – was not sanctioned, it’s pretty hard to find. Its location is not marked on any map. But once you’re there, feel to explore, swim in the turquoise waters, climb (at your own risk) in the driftwood towers, and feel like a genuine Lost Boy (or Girl). Just remember, the hard part is getting back up from the coastline!

Last year, unfortunately, parts of Nimis burned down in an apparent arson attack – the tower nearest the water is totally gone. But most of the towers remain and it’s still worth seeing this extraordinary piece of art. Vilks himself has said that the design is a living, evolving concept which grows stronger with the changes it has been through over multiple decades – including this type of ‘brutal’ critique. It’s not unusual for Swedish cities to have “culture houses” (kulturhus), where the community can gather to appreciate culture and art, such as concerts, exhibits, seminars, and theatre.

It is unusual, however, for them to be designed by the son of Jörn Utzon, the architect behind the Sydney Opera House.

Kim Utzon, like his father, created a remarkable white cultural centre with an unusual shape right by the sea. But Kim’s version, the Dunkers Cultural Centre, is more…well, Swedish.

Its eye-catching shape complements but does not overwhelm the surroundings. From the seaside it may look elegant, even dainty, but in fact it’s built like a medieval stronghold, with a wall of offices and classrooms surrounding and protecting the inner “treasury” – the exhibits.

…and that’s just the beginning.

The journey from the Icehotel to Dunkers Kulturhus covers 1,781 kilometres – as the car drives. We’ve sampled a few highlights of Swedish open-minded creative design, from the Arctic Circle to the southern coast…but there’s so much more than that.

Discover additional destinations at Visit Sweden, or learn more about the values of Swedish design here.

This article was produced by The Local Client Studio and sponsored by Visit Sweden.