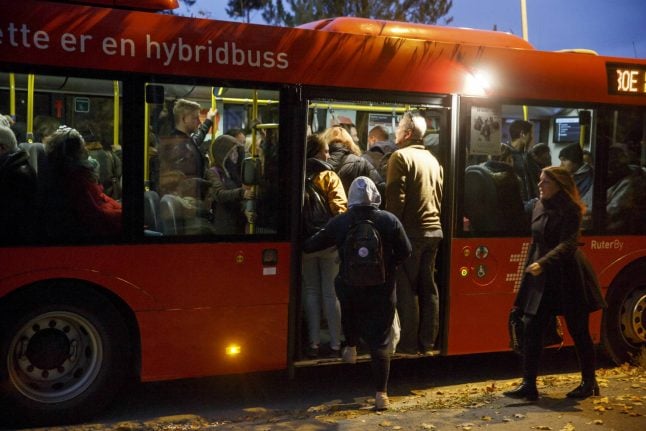 Commuters getting on a packed bus in Oslo. Photo: Cornelius Poppe / NTB scanpix

After being named last week as the world’s happiest country, it might be reasonable to ask why Norwegians don’t express their contentment a bit more.

There's no obvious Norwegian equivalent of the American “have a nice day” or British habit of holding a door open for somebody.

But Norwegian politeness is expressed by trying not to intrude on others’ privacy, says one researcher.

“Norwegians don’t want to disturb others or make superficial conversation with people we don’t know. We also do not ask for help unless we really need it,” Kristin Rygg, linguistics researcher at the Norwegian School of Economics (Norges Handelshøyskole), told broadcaster NRK.

Rygg, who has written a number of articles on politeness theory, told the broadcaster that the Norwegian from of politeness can be difficult for foreigners to understand.

“There are many opinions on whether or not we are polite, but we are not really aware of this. When we are criticized for being impolite, we have no way of defending ourselves, because there are no clear norms on what Norwegian politeness is,” Rygg said.

The researcher said that, in her opinion, Norwegians are polite – but that they do not like to disturb others unnecessarily, which can be perceived as arrogance or a lack of caring.

“If we become more aware of how we are behaving, then we can change. There should probably be a discussion of what characterizes Norwegian politeness. There’s no such thing as a universal politeness that Norwegians can copy,” she said.

Pawel Urbanik, doctoral researcher at Oslo University’s Department of Linguistics and Scandinavian Studies, says that Norwegians can be both polite and impolite.

“To say Norwegians are polite or impolite is an assessment; not something that you can say either yes or no to,” Urbanik told NRK.

But he added that there was a difference between how Norwegians perceive each other and how they are perceived by foreigners.

Being aware of those around you is the most important part of being polite, said the researcher.

“One thing that possibly helps you to be perceived as polite is being aware of other people around you. Being considerate towards others can obviously be understood in different ways, depending on culture and place,” he said.