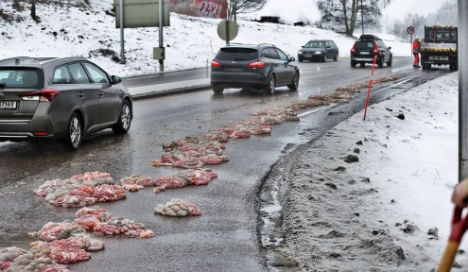 Some 150kg to 200kg of intestines covered a 70m stretch. Photo: Geir Eriksen
The trailer, which was carrying intestines from a nearby slaughterhouse, flipped opened as it went round a roundabout and began depositing its unsavoury contents, releasing a second load s later when it took a sharp right turn.
“The police messaged that there was some garbage that had fallen out of the trailer but when I got there it was not garbage, it was guts,” freelance photographer Geir Eriksen told The Local.  It must have been 150kg-200kg. It didn't smell that good.”
s
Local police, who were informed of the accident at 11.30am, wasted no time in delegating the grisly clean-up job to the Norwegian Public Road Administration (NPRA).
“It has created problems for us, because there is a lot of it, and the smell is horrible”, Senior NPRA engineer Dler Jaf told the Dagbladet newspaper.
According to the local Sandefjords Blad newspaper, the guts covered a distance of about 70 meters.
“We will have to wash the road as soon as we've gotten the guts out of the way”, Jaf told the paper.
According to Eriksen, the man pulling the trailer had bought the guts to spread on his fields to lure foxes, which he intended to shoot.