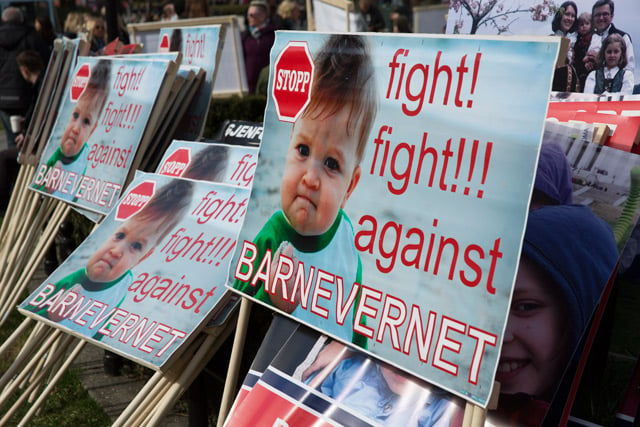 The Norwegian Child Welfare Service (Barnevernet) has been the subject of a number of protests both in Norway and around the world. Photo: Ole Berg-Rusten / NTB Scanpix
The Norwegian Child Welfare Service (Barnevernet) has long been accused of overreach in its efforts to protect children from potentially abusive situations.
The agency faced a wave of anger and worldwide protests last year that were largely spurred by the removal of five children from their Norwegian/Romanian parents. But although the Bodnariu family become a rallying point for both Romanians and the international Evangelical community, their case hardly stands alone.
Anders Henriksen, the head of section at the Norwegian Directorate for Children, Youth and Family Affairs (Bufdir), told The Local last year that a total of 1,664 children were taken into care in 2014. Of those, 424 had mothers who were born abroad, leading many to accuse the agency of “state kidnappings” over cultural differences.
Eight cases within 15 months
With eight seperate cases having been taken up by the ECHR since December 2015, a long-time human rights lawyer has warned that Norway needs to take action to address the high number of complaints about the agency.
Speaking to TV2 about a 2016 case in which a child was taken from his parents because his mother was diagnosed as having minor mental problems, Gro Hillestad Thune, who was a judge on the court in Strasbourg for 17 years, said there needs to be better oversight of Barnevernet.
“How in the world are we going to get control of this child welfare system in Norway? There are major indications that the requirements of Article 8 [of the  European Convention on Human Rights, which protects residents’ 'private and family life, his home and his correspondence', ed.] were not met,” she told TV2 about the case invloving parents Aimee Hansen Løland and Arne Løland.
Although Aimee Løland’s diagnoses was refuted by two mental health experts, the Barnevernet decision to remove the couple’s child stood. Thune also said that the Norwegian authorities’ declaration that 69-year-old Arne Løland was “too old” to be a good father was also probably a violation of his human rights.
“Serious warning”
Thune told TV2 that the high number of cases recently taken up by the ECHR sends a very strong signal.
“It is an extremely serious warning to Norway from Strasbourg to the Norwegian authorities that [the ECHR] has taken on so many cases within an area like child welfare,” she said.
Czech MEP Tomáš Zdechovský, a leading voice amongst Barnevernet's critics, called the court's decision to take on so many Norwegian child welfare cases “a breakthrough”.
“This means that the ECHR has found strong indications that human rights violations by Norway have occurred. It is obvious that the ECHR has noticed that there is something very dangerous happening in Norway,” he told The Local.
He added that he hoped the attention the cases have received in the European court system will “expose the system flaws” within the Norwegian Child Welfare Service.
Complaints from numerous countries
TV2 previously reported that child removals are now increasingly happening immediately after birth. In 2008, Barnevernet took over the care of 16 children immediately following their birth. By 2014, that number had tripled to 44.
With the increase in cases, there has also been a rise of voices critical of Norway's child protection practices.
In an open letter, 170 Norwegian child protection professionals including lawyers and psychologists called Barnevernet a “dysfunctional organisation which makes far-reaching errors of judgement with serious consequences”.
And the criticism has extended far beyond Norway. Citizens of the Czech Republic, Russia, Lithuania, India, and Brazil, among other countries, have accused Norway of abusing its authority and ruining families. Even neighbouring Sweden has expressed concern about Barnevernet.