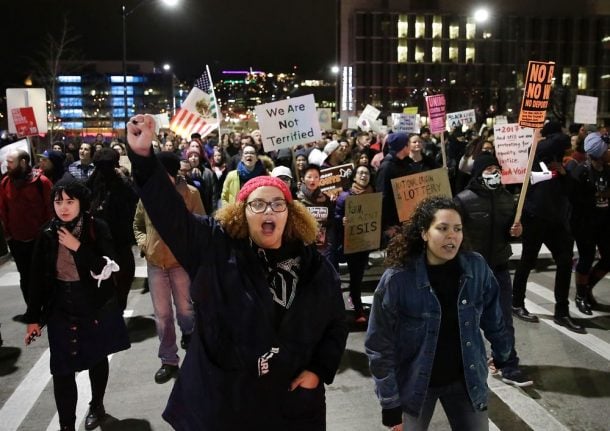 Trump's immigration policies touched off protests across the US, including this demonstration in Seattle. Photo: JASON REDMOND/SCANPIX
“All countries, including the USA, have a responsibility to protect people on the run. We assume that the United States will continue to participate in the resettlement of refugees,” he tweeted.

In a later tweet, he said Norway was “concerned” about the new US policy.
“Norway strongly believes that refugees should receive equal treatment regardless of religion, nationality or race. Hence, concerned [about] US policy,” he wrote.

Norway strongly believes that refugees should receive equal treatment regardless of religion, nationality or race.Hence, concerned US policy

In an executive order signed on Friday, Trump suspended the US refugee resettlement programme for 120 days and put an indefinite stop to the acceptance of Syrian refugees.
He also barred citizens from the Muslim-majority countries Iran, Iraq, Libya, Somalia, Syria, Sudan and Yemen from entering the United States for 90 days.
Trump's immigration moves sparked anger, confusion and protests in airports around the world. A passenger aboard a Norwegian flight from Oslo to Los Angeles was denied entry upon arrival, the airline confirmed.
The entry ban also applies to dual citizens of any of the seven countries on Trump’s blacklist. The affect on Norway is expected to be limited, as Norwegian immigration law only allows for dual citizenship in certain limited circumstances.
The Norwegian government said that it has made its views on Trump’s new policies known to Washington and that it would seek further clarification on how the ban might affect Norwegians.