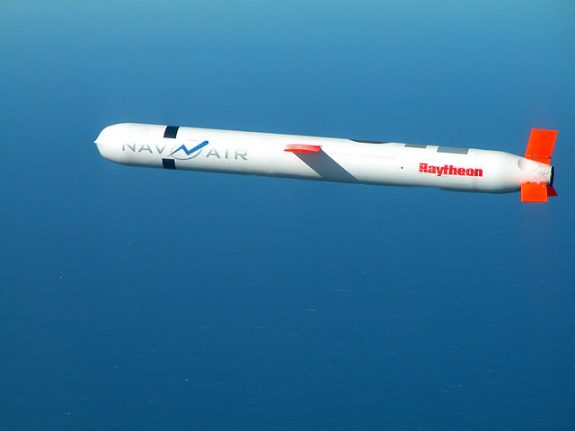 A Raytheon Tomahawk Block IV cruise missile during a US Navy flight test in California in 2002. Photo: Public domain
The fund, worth around 7.42 trillion kroner (€830 billion, $892 billion) and which is subject to strict ethical guidelines, excluded Raytheon from its portfolio in 2005 because of its role in the production of these weapons.
International campaigners have long sought a ban on cluster weapons because of the serious danger they pose to civilian populations.
“The Council on Ethics has received confirmation from Raytheon Co that the company no longer has any activities associated with production of cluster munitions (and) has on the basis of this information recommended the bank to revoke the exclusion,” said the bank, which is tasked with managing the Norwegian fund.
The fund holds stakes in around 9,000 companies worldwide. Its investment policy is focused on sustainable economic, environmental and social development.
Ethical rules bar it from investing in companies accused of serious violations of human rights, child labour or serious environmental damage, as well as manufacturers of “particularly inhumane” arms, tobacco firms and companies who generate more than 30 percent of their sales from coal production.
More than 130 companies have been blacklisted, including heavyweights such as Airbus, Boeing, Philip Morris, British American Tobacco and Rio Tinto.
While it is commonly called a state pension fund, the fund is designed to meet the future needs of Norway's welfare state and is fuelled by the country's oil and gas revenues.