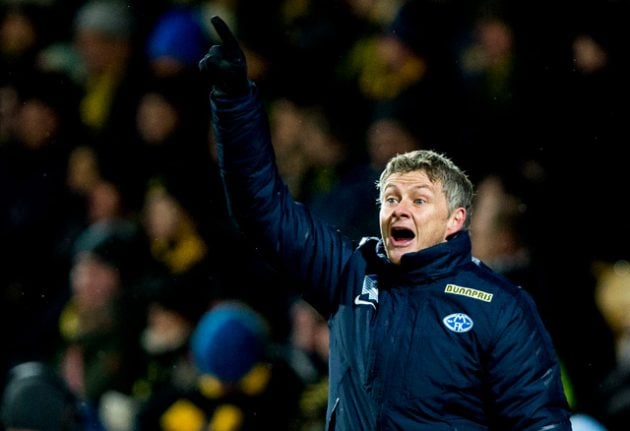 Solskjær said he didn't want to leave his job at Molde. Photo: Vegard Wivestad Grøtt / NTB scanpix
Norway have been looking for a successor to Per-Mathias Høgmo after he resigned in November following a run of poor results.
But Solskjær, 43, said he would not be leaving Molde, the club he returned to in 2015 following an ill-fated spell in charge of Cardiff City in the Premier League.
“I'm staying here,” he told Norwegian television, hours after speaking with officials from the country's football federation.
“I have a job that I'm happy with and I gave my word that I would stay here,” said the man who scored the winning goal for United in their 1999 last-gasp 2-1 come from behind victory over Bayern Munich in the Champions League final.
Solskjær is the second Norwegian candidate in a week to turn down the job after Ståle Solbakken opted to remain with FC Copenhagen. American Bob Bradley, sacked by Swansea City last month, has also held talks with the Norwegian FA.
Whoever takes up the post faces a huge challenge as Norway bid to qualify for their first major tournament since Euro 2000. The Norwegians are fifth in their 2018 World Cup qualifying group after three defeats in four matches, with their only victory coming against minnows San Marino.
However, Solskjær, who played for his country at both the 1998 World Cup and European Championship two years later, did admit he would one day like to manage on the international stage.
“It's a distant dream to lead Norway towards the World Cup finals but before that I would really like to steer Molde into the Champions League group stage,” he said.