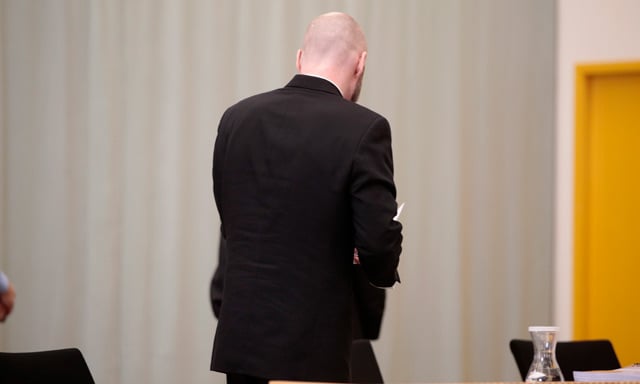 Breivik left the makeshift court room on Wednesday and headed back to isolation. Photo: Lise Åserud / NTB scanpix
Breivik's “mental vulnerability” was a central issue in an appeals case pitting the Norwegian state against the 37-year-old who killed 77 people in his 2011 attacks.
The state argued during the six-day hearing that ended Wednesday that he is holding up well under his strict prison regime.
Breivik's lawyers meanwhile maintained it is aggravating his fragile psychological state.
“Is this man healthy in a general sense?” Breivik's lawyer Øystein Storrvik asked in his final remarks to the court. “His mental health doesn't seem good, in my opinion.”
Breivik is serving a 21-year prison sentence handed down in 2012, which can be extended indefinitely as long as he is considered a threat.
Last year, an Oslo district court stunned victims' families when it found the Norwegian state guilty of treating Breivik “inhumanely” and in “degrading” fashion, in breach of Article 3 of the European Convention on Human Rights.
It noted the main reason was his prolonged isolation. Breivik has been held apart from other inmates since 2011 for security reasons.
The state appealed that ruling.
The killer has complained of headaches and told the appeals court last week his isolation has radicalised him further.
In July 2011 Breivik, disguised as a police officer, tracked and gunned down 69 people, most of them teenagers, at a Labour Party youth camp on the island of Utøya, shortly after killing eight people in a bombing outside a government building in Oslo. He said he killed his victims because they worked for multiculturalism.
While the state's lawyers have painted a picture of an inmate in strong physical and psychological health, Storrvik said he had doubts about Breivik's mental health, citing among other things the inappropriate content of his correspondence and his persistent insensitivity over his crimes.
“It is because of these elements … that, at least to me as a lawyer, he can in no way be considered as being in good health as defined by the European Court of Human Rights,” he said.
At his side, Breivik, who sees himself as an ideological leader, listened to the remarks motionless with his eyes cast downward.
'A VIP inmate'
Storrvik also noted that the length of his client's isolation “is soon approaching six years” and argued that Breivik's prison conditions are all the more important given that he would in all likelihood spend the rest of his life behind bars.
The state has argued that Breivik has not been isolated, noting his multiple contacts with guards, with whom he plays backgammon, a prison visitor, his lawyers and pastors.
On Tuesday, Attorney General Fredrik Sejersted told the court Breivik was “a VIP inmate” who enjoyed “cosy” conditions, including three cells, some of which have views of nature outdoors, where he can play video games and watch television.
He also has a computer without internet access, gym machines, books and newspapers.
But Breivik's lawyer has insisted that while his client has contact with professionals, these are not people with whom he can build relationships. He called for Breivik to be allowed contact with other inmates, suggesting they could for example play badminton together.
Breivik has also complained about the frequent use of handcuffs and full-body searches as well as the strict controls on his correspondence.
His lawyer argued that this “censorship” was another violation of the European Convention on Human Rights.
On that point, the lower court found in favour of the state, which had argued that Breivik remained a dangerous man still trying to spread his ideology, and that checking his mails was necessary to prevent him from building a network capable of carrying out further attacks.
The appeals court is expected to issue its ruling in late February.