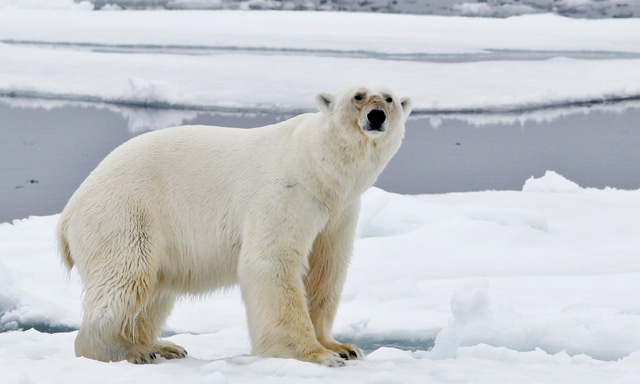 The polar bear family had moved on by Tuesday morning. Photo: Håkon Mosvold Larsen / Scanpix
“We had hoped that they would continue out of Longyearbyen and along the waterfront, but they remained in Longyearbyen during the night. We tend not to be bothered by polar bears here, so having three in town at once is unusual,” Svalbard District Governor Kjerstin Askholt said.
At 5.30am on Tuesday, the footprints of the three bears were observed at the University Centre in Svalbard. Shortly thereafter the prints were seen near the Isdammen lake outside of Longyearbyen.
“So, they have moved out of town again,” Askholt said.
The district governor said that the polar bear family’s movements will be tracked by officials.
“We want to have as much awareness and control over the bears as possible. They are now being followed by crews on snowmobiles who will drive them into Todalen [valley],” he said.
Askholt asked residents of the isolated capital to be cautious when moving about but said that most people in Longyearbyen know how to respond to polar bears.
“I do not have a full overview of all of the homeowners, but they tend to be cautious and are used to living in an area with the danger of polar bears,” he said.
“People are quite relaxed here. Most people are concerned about animal welfare and don’t think we should chase [the bears] too hard. I haven’t heard from anyone who is worried or scared – people seem to take it easy and thankfully follow the advice about being cautious,” he added.
An estimated 3,000 polar bears live on Svalbard.