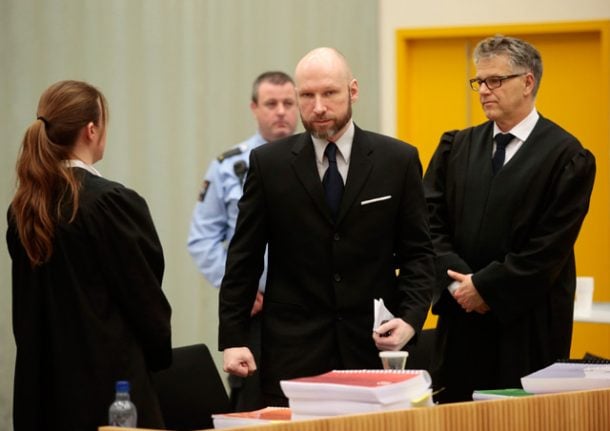 Breivik's lawyer Øystein Storrvik (right) is due to give his closing arguments on Wednesday. Photo: Lise Åserud/NTB Scanpix
“Even a person like Breivik who has been convicted of such horrible crimes must be treated humanely and respectfully,” a lawyer representing the Norwegian state, Marius Emberland, told the court.
The state wants the appeals court to overturn the lower court's ruling in April, which stunned observers and upset the survivors and families of the victims of Breivik's July 2011 twin attacks that left 77 people dead.
The Oslo district court had at the time ruled partly in favour of the right-wing extremist, finding that his prison regime was “inhumane” and “degrading”, in breach of Article 3 of the European Convention on Human Rights, especially his prolonged isolation.
In July 2011 Breivik, disguised as a police officer, tracked and gunned down 69 people, most of them teenagers, at a Labour Party youth camp on the island of Utøya, shortly after he killed eight people in a bombing outside a government building in Oslo.
He said he killed his victims because they valued multiculturalism.
Breivik, now 37, was found guilty of the bloodiest attack on Norwegian soil since World War 2 and sentenced in 2012 to 21 years in prison, which can be extended indefinitely as long as he is considered a threat.
“The district court has placed the bar too low for a violation of Article 3,” Emberland said on Tuesday.
In prison, Breivik has three cells where he can play video games and watch television. He also has a computer without internet access, gym machines, books and newspapers.
But, held apart from other inmates for security reasons, he told the court that he is suffering from his isolation, which he claims has radicalised him further.
He has also complained about the strict controls on his correspondence, the full-body searches and the frequent use of handcuffs, especially in the early stages of his incarceration.
The state has argued that Breivik has not been isolated, noting his multiple contacts with guards, with whom he plays backgammon, his lawyers and pastors, as well as the activities made available to him in his cell and his studies by correspondence.
Authorities have painted a picture of an inmate in good physical and psychological health, but one who remains highly dangerous, shows no remorse and who is trying to build a far-right network from prison — all of which justify the severe controls on his contacts with the outside world, they argue.
The six-day hearing concludes on Wednesday when Breivik's lawyer presents his final arguments. A ruling is due in February.