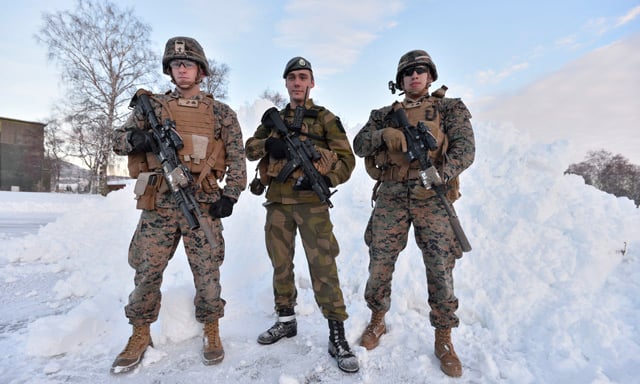 A 747 carrying 300 Marines arrived on Monday. Photo: Ned Alley / NTB scanpix
After leaving North Carolina aboard a chartered 747 on Sunday evening, the troops landed with their luggage and weapons at the Vaernes airport near the central town of Trondheim, television footage showed.
Nato member Norway announced in October it had accepted a US request to station troops on its soil.
The deployment, by rotation so as not to anger Moscow, has been presented as a one-year test to enable the Marines to train and conduct exercises with the Norwegian army in harsh conditions.
The initiative has however annoyed Russia, amid rising tensions with the West over the Ukraine crisis and the conflict in Syria.
This “for sure won't make better (the) security situation in Northern Europe,” a spokesman for the Russian embassy in Oslo, Maxim Gurov, told AFP in an October email.
Before joining Nato in 1949, Norway allayed Russian fears by pledging not to open its territory to foreign combat troops “as long as it is not under attack or threat of attack.”
The Norwegian government has argued that Nato troops regularly carry out exercises in the country and that deployment by rotation is not the same as opening a permanent US base.
Until now, the US has had large quantities of military materiel pre-positioned in tunnels dug into Norway's mountains, but no troops.