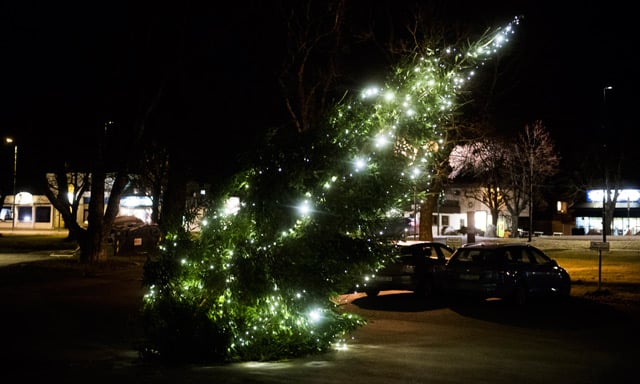 The Christmas tree in Karlshus couldn't stand up to Storm Urd's force. Photo: Jon Olav Nesvold/NTB Scanpix
On Tuesday morning, a number of roads and passes were still closed as a result.
“A number of county roads and some highways are still closed. Trees have toppled and there is a lot of wind and rain. All emergency centres were kept busy all night,” Dag-Rune Gundersen Sneve of the Norwegian Public Roads Administration told NTB at around 7am on Tuesday.
The violent storm, which also blasted Denmark and Sweden, decreased in strength in western Norway on Monday evening, but after nightfall Urd struck with force throughout the rest of the country.
Tens of thousands without power
The storm knocked out power to some 70,000 households on Monday afternoon and evening. By 10pm, 40,000 had had their power restored but there were still 21,000 in Hordaland, 5,000 in Sogn og Fjordane and and 2,000 in Rogaland without power.
“For the most part the cause was large trees that fell across power lines,” Ingunn Åsgard Bendiksen of the Norwegian Water Resources and Energy Directorate (NVE) told NTB on Monday night.
Energy and infrastructure company BKK reported that most households should have power restored by 12pm on Tuesday.
Worst was over by Tuesday morning
Although there were still strong winds on Tuesday morning, the worst of Storm Urd was over.
Wind strengths had died down somewhat and waves decreased. The centre of the storm passed through Southern Norway during the night and weakened while moving over Sweden and Denmark.
In eastern and southern Norway, the Norwegian Public Roads Administration (NPRA) reported a number of downed lampposts and trees that had fallen across roads. In the Bærum town of Bekkestua, a large Christmas tree in the town centre toppled but caused no injuries. A Christmas tree in Karlshus in Råde Municipality was also nearly toppled by Urd.
The E18 motorway was closed in Follo at 3am after a 40sqm metre sign blew across the road. A worker tries to clear a tree on E39 east of Lyngdal. Photo: Tor Erik Schrøder / NTB scanpix
NPRA reported that most ferry lines in Rogaland, Sogn og Fjordane and Hordaland had returned to normal operations on Tuesday morning.
“But the ferry port at Mortavika in Rogaland is closed. Ferries will thus sail between Årsvågen and Mekjarvik. Additionally, the ferry between Vangsnes and Hellavik is closed,” Sneve Gundersen said.
Farther north, it was uncertain whether all ferries would be able to operate as normal on Tuesday morning and afternoon.
The Norwegian Civil Defence worked feverishly throughout the night in several counties while the storm was at its worst. In Hordaland, efforts didn’t end until 4am on Tuesday.
As of Tuesday morning, the following mountain passes were still closed: Hardangervidda, Tyin-Årdal, Haukelifjell, Vikafjellet, Strynefjellet, Hol-Aurland, Dovrefjell and Saltfjellet.
New assessments were to be made at 12pm.