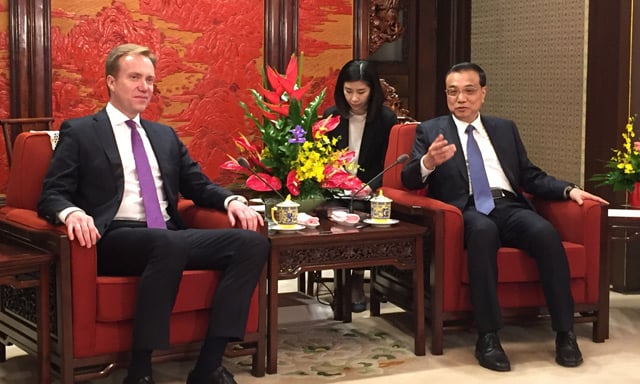 Norwegian Foreign Minister Børge Brende and Chinese Premier Li Keqiang in Beijing on Monday. Photo: Frode Overland Andersen /UD / NTB scanpix
Addressing the resumption of diplomatic relations between China and Norway after a six-year rift, the newspaper’s editorial board wrote that Norway must have “learned its lesson”.
“Norway has paid its price due to its intervention in Chinese domestic affairs, with its political relations with Beijing almost stalled and their economic ties witnessing a tremendous landslide,” it wrote.
“Norway has a population of merely 4 million, but it tried to teach China, a country with 1.4 billion people, a lesson in 2010. It was a ridiculous story,” the editorial continued.
For the record, Norway’s population is 5.25 million.
Relations between Norway and China were formally normalized on Monday after six years of cold air between the countries. The relationship froze when China reacted strongly to Chinese dissident Liu Xiaobo being selected for the Nobel Peace Prize in 2010.
“Norway did not expect Beijing's strong countermeasures. According to information released from the Chinese side, Norway has deeply reflected upon the issue and learned its lesson. The country's attitude toward resuming ties with Beijing is very proactive,” Global Times wrote.
Global Times is released in both Chinese and English by owner and publisher People’s Daily, which is an official newspaper of the Chinese Communist Party. Its editorial on Norway can be read here.