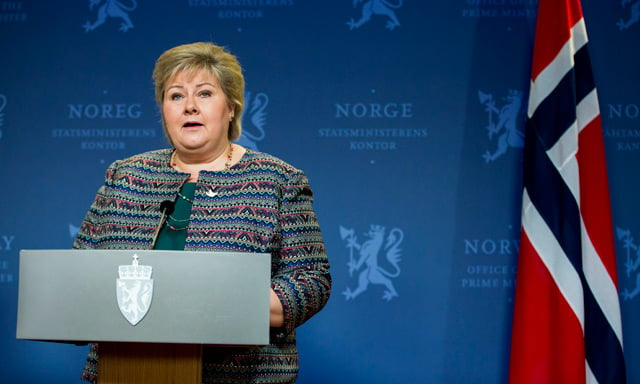 PM Erna Solberg said the resumption of talks with China would be a boost for Norway's businesses. Photo: Vegard Wivestad Grøtt / NTB scanpix
The Nobel Peace Prize in October 2010 to human rights activist Liu Xiaobo — imprisoned in his own country by authorities who consider him a “criminal” — had angered the Chinese regime so much that it suspended its ties with Norway.
During a surprise visit to Beijing by Norwegian Foreign Minister Børge Brende on Monday, the two nations issued a joint declaration announcing the thaw in their ties.
“The Norwegian government reiterates its commitment to the one-China policy, fully respects China's sovereignty and territorial integrity, attaches high importance to China's core interests and major concerns, will not support actions that undermine them, and will do its best to avoid any future damage to the bilateral relations,” the statement said.
Human rights issues were not mentioned in the two-page document.
“We haven't made any concessions but we have engaged in confidence-building work over a long period of time,” Prime Minister Erna Solberg told reporters in Oslo.
According to Norwegian media, China had demanded an official apology in order to restore ties, but Norway's government repeatedly refused, insisting that the Nobel Committee was an independent body free to make its own choices.
“The situation since 2010 has been difficult,” Brende said in a press statement issued in Oslo. “The normalisation of our relationship is the result of long and painstaking diplomatic efforts at many levels to restore trust between our two countries.”
The announcement means talks can now resume on a free trade pact between Norway, rich in raw materials, and China, the world's second-biggest economy.
The talks were frozen following the Nobel brouhaha.
“There is no doubt that the Norwegian economy has suffered,” Solberg said.
“Even if our trade with China has not decreased, we have not been part of the enormous upswing from China in the same way many other countries have,” she said.
Salmon exports to China, one of Norway's biggest export items, suffered as a result of the row, dealing a heavy blow to the industry.
On Monday, stocks of salmon producers were up on the Oslo stock exchange.
The resumption of bilateral relations was however not raised at a press briefing at China's foreign ministry on Monday.