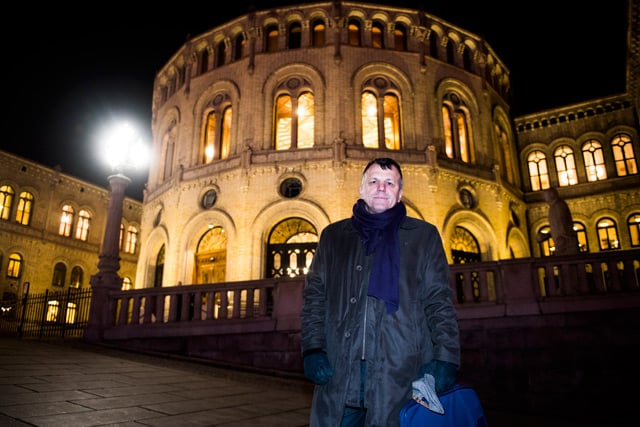 FIDH president Dimitris Christopoulos in front of parliament on Wednesday. Photo: Jon Olav Nesvold / NTB scanpix
“The cynicism among politicians, both in Norway and the rest of Europe, when it comes to refugees has reached a level we have not seen before. They should be ashamed,” Dimitris Christopoulos said.
Christopoulos was one of the featured speakers at a demonstration organized in protest against the government's asylum and immigration policies.
“It has taken a century and two World Wars to establish human rights. Now they are threatened,” he said to the crowd of nearly 4,000 torch bearers who had formed a sea of light in front of parliament.
“In Europe, with its half a billion inhabitants, a million refugees is called a crisis. But we are not the ones who are in crisis. It is the millions of people who cannot get anywhere. This is shameful,” he said.
On Thursday, Christopoulos, who also is a professor of political science, will meet with the Norwegian Helsinki Committee, a human rights NGO, and representatives of the Norwegian Foreign Ministry.
He has just one message for Norwegian politicians.
“If you really want to achieve respect and moral credibility as a rich and well-developed society, you cannot shut yourselves in. It is impossible,” he said.
“You need to show solidarity with the weak and those who need to escape. If you do not take responsibility, but instead build walls around the country and send signals that people are not welcome, it will undermine respect in the long term,” he said.
Through a number of restrictions, Norway has brought its asylum numbers down to their lowest point in 19 years.