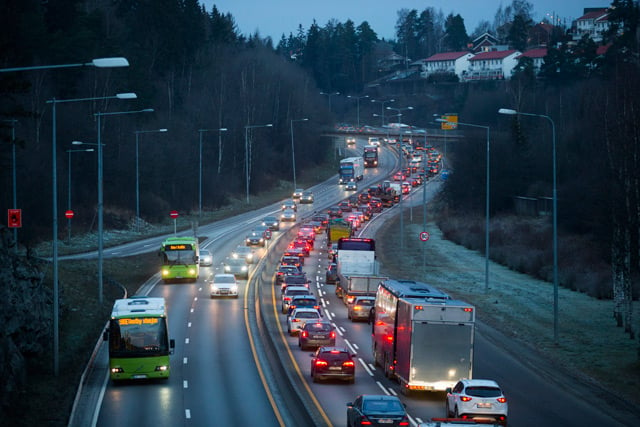 Norway has 19 electric cars for every 1,000 inhabitants. Photo: Håkon Mosvold Larsen / NTB scanpix
The clean cars are already saving the Nordic country some 200,000 tonnes of CO2 emissions per year, and the plan is to boost their number to 400,000 over the next three years, the Electric Vehicle Association said.
Generous state-funded measures, including tax breaks, free city tolls and free parking, have catapulted Norway to the top of the electric car league.
With a population of 5.2 million, Norway has a total of 19 electric cars for every 1,000 inhabitants, with electric vehicles making up for almost 20 percent of new car registrations.
By last year, Norway had the fourth largest fleet of electric cars in the world in absolute terms, after the United States, China and Japan, according to Transport and Environment, a European green transport lobby.
“The present fleet cuts approximately 200,000 tonnes of CO2 emissions annually,” the association's secretary general Christina Bru said.
“Even though BEVs (battery electric vehicles) only account for three percent of the total passenger car fleet, we have achieved a substantial (emissions) reduction,” she added.
Bru called on authorities to maintain the benefits granted for the vehicles, saying that the electric car fleet needs to quadruple to meet Norway's climate targets.
After an initial target of 50,000 electric vehicles had been met in May 2015, policy makers renewed the incentives, but hinted a very gradual and partial phase-out.
While these benefits are praised by environmental organisations, their cost-effectiveness is sometimes criticised by researchers.
Sales are also suffering from increasing competition from hybrid cars.