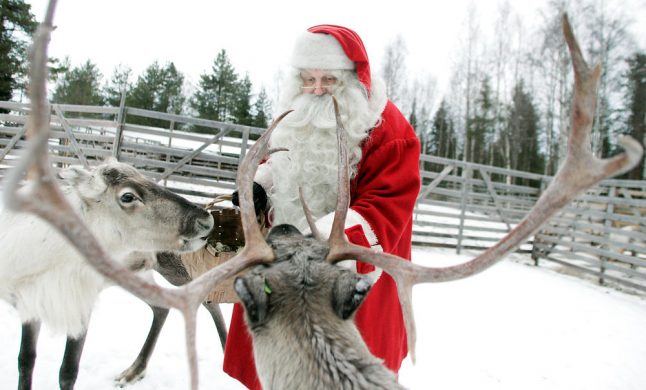 A man dressed as Santa Claus feeds reindeers at a reindeer farm in preparation for Christmas on the Arctic Circle in Rovaniemi, northern Finland. Photo: Kacper Pempel / Reuters/Scanpix

A team led by Steve Albon from Scotland’s James Hutton Institute has weighed reindeer on Svalbard over a period of 16 years and found that their weight has decreased 12 percent during that time.
“Considering how important body weight is for reproduction and survival, this is potentially a lot,” Albon said.
According to the study, the average weight of adult reindeer on Svalbard fell from 55kg to 48kg.
The Svalbard reindeer is a subspecies of reindeer which is smaller than its cousins on mainland Europe because of the more meagre food availability of its habitat.
Males can reach a maximum size of 90 kilos and 1.6 metres long and females reach 70 kilos (154 pounds) and 1.5 metres (4.9 feet) in length, according to the Norwegian Polar Institute.
Svalbard is one of the areas in the world that is most affected by global warming. Warmer winters lead to more rain, which often freezes on the ground, leaving a layer of ice that makes it difficult for the reindeer to find food.
Although the ice is causing problems, the reindeer population on Svalbard has actually increased in recent decades. The resulting greater competition for food may also have contributed to their weight loss.
Scientists believe that in the years to come, reindeer living in the Arctic may continue to grow both more populous and smaller, which will increase the risk of them dying in droves if the ice covers their food. Some 61,000 reindeer died on Siberia’s Yamal Peninsula two years ago under similar conditions.