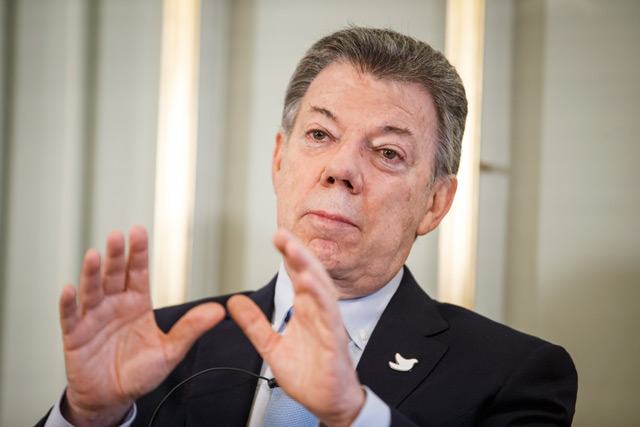 Colombian President Juan Manuel Santos held a press conference in Oslo on Friday. Photo: Heiko Junge/NTB Scanpix
Speaking at a news conference in Oslo on the eve of the prize ceremony, Santos said the prestigious award “came like a gift from heaven because it gave us a tremendous push” to achieve a new peace deal with FARC after Colombian voters narrowly rejected an initial agreement in an October referendum.
“People in Colombia interpreted it as a mandate from the international community to persevere, to continue striving to achieve a peace agreement,” Santos said.
“It encouraged me, it encouraged our negotiators, but particularly it encouraged the Colombian people to press (for a new deal),” he added.
The accord, signed with pens made from bullet casings on September 26th after nearly four years of talks, was supposed to be ratified in an October 2nd referendum. But voters rejected it, leaving Colombia teetering between war and peace.
Five days later, Santos was announced as the 2016 Nobel Peace Prize laureate.
Santos' government and the Marxist FARC rebels then signed a renegotiated peace accord on November 24th.
The country's five-decade conflict has killed more than 260,000 people, left 45,000 missing and forced nearly seven million to flee their homes.