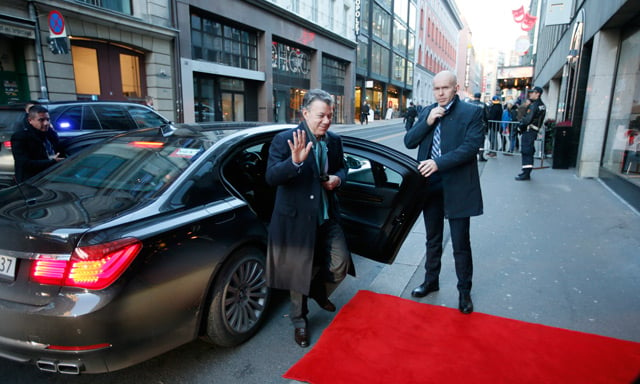 2016 Nobel Peace Prize winner Juan Manuel Santos arriving at Oslo's Grand Hotel on Friday. Photo: Cornelius Poppe / NTB scanpix
Santos arrived in Oslo at 9.30am along with his wife María Clemencia Rodríguez and the couple's three children. The Colombian president began his day with meetings at the Norwegian parliament before holding a press conference at 1pm.
The 65-year-old will be handed this year’s Nobel Peace Prize for 2016 for his efforts to achieve a peace agreement with the FARC guerrillas in Colombia. The agreement put an end to 50 years of civil war.
As of Friday, it was not believed that members of FARC would be represented at Saturday’s award ceremony.
Ceremony and more on Saturday
Before Santos is presented his award on Saturday, there will be a party in his honour at the Nobel Peace Center in the City Hall Square beginning at 11am. Children from Oslo organize the event, which is hosted by Save the Children.
Then Santos will be whisked into Oslo City Hall, where the royal couple, crown prince couple and members of Norway’s government coalition and parliament will be waiting.
The Nobel Peace Prize ceremony will start at precisely 1pm with a musical performance. As is tradition, the Nobel Committee is holding its card close to its chest when it comes to which artists have been selected to perform for the prize winner.
The prestigious gold medal and a handwritten diploma will be given to the laureate by committee deputy chairman Berit Reiss-Andersen. Committee Chairman Kaci Kullmann Five will not attend the ceremony due to illness.
After another musical performance, Santos will deliver his Nobel lecture in what is the highlight of the ceremony.
Although the award ceremony itself is by invitation only, it will be live transmitted inside the Nobel Peace Center from 12.30pm to 2.30pm in an event that is free and open for everyone
Later on Saturday, there will be the traditional torchlight parade from Oslo Central Station to the Grand Hotel, where Santos will come out on the balcony and wave.
The day ends will end with a gala dinner at the Grand Hotel hosted by the Nobel Committee.
Busy Sunday
Sunday will be no day of rest for the prize winner. His day will start at 10am with a meeting with parliamentary president Olemic Thommessen. Meetings with the Defence Committee, Foreign Minister Børge Brende and Prime Minister Erna Solberg will follow in rapid succession.
Solberg has also invited Santos to a working lunch at the prime minister’s residence, which will conclude with a joint press conference.
On Sunday afternoon, Santos will conduct the official opening of the traditional Nobel exhibition at the Nobel Peace Center, before heading off for the Nobel Peace Prize Concert at Telenor Arena.
The star-studded show will be hosted by American talk show host Conan O'Brien, and among the artists performing will be Sting, Colombian musical superstar Juanes, American singer Halsey, Swedish pop duo Icona Pop, the award-winning Norwegian band Highasakite and 14-year-old teen sensation Marcus & Martinus.