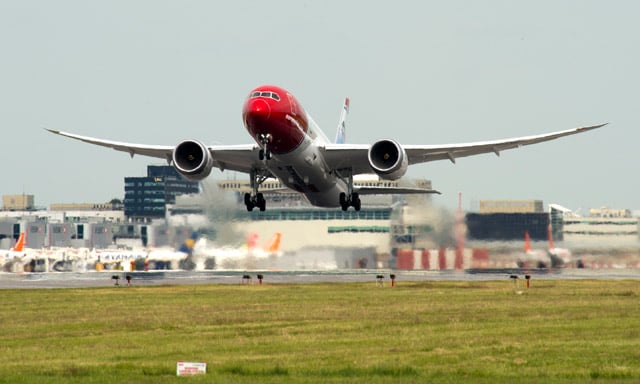 Photo: David Dyson/Norwegian
The US Department of Transportation has granted Norwegian Air International (NAI) permission to fly into and out of the United States in a decision that took effect on December 2nd.
Norwegian has waited three years for the licence, which was vehemently opposed by American unions, politicians and domestic airlines who argue that Norwegian’s use of NAI, an Irish subsidiary, was designed to circumvent strict labour laws in Norway and use crews from low-cost countries.
Norwegian issued a statement calling the DOT decision “a victory for millions of passengers who will benefit from more choice and lower fares”.
The US agency had given initial approval for NAI to operate in the United States back in April but the proceedings hit numerous road blocks as competitors, unions and politicians tried to block the deal.
Norwegian labour union Parat criticized the final DOT decision.
“We know that Norwegian has used Asian labour, and that they want to open routes and fly to other parts of the world. We fear that American and European workers will not have the chance to compete with wages and working conditions from other continents,” spokesman Vegard Einan told broadcaster NRK.
Norwegian CEO Bjørn Kjos called the approval “long overdue” and said it would now pave the way for the airline’s expansion plans.
“This means that Norwegian can continue its global expansion with full force and open new routes to exciting destinations worldwide,” he said.
American labour unions, however, may keep up the fight. SWAPA, the trade association for pilots of US carrier Southwest, said it “strongly condemns the short-sighted, under-cover-of-darkness decision” and called on President-elect Donald Trump to reverse the decision.
“The men and women of SWAPA call upon President-elect Trump to intervene in the NAI decision and undo yet another trade blunder by President Obama,” the union wrote in a press release.
The US Travel Association, however, praised the decision.
“The American travel community is ecstatic at the decision by the Obama administration to allow new service to US cities by Norwegian Air International,” CEO Roger Dow said.
“There is zero downside to allowing more low-cost carriers into US airports: it's a policy that's good for consumers, stupendous for US economic and job growth, and even good for US airlines because it broadens the market for domestic connector flights. A rising tide lifts all planes, so to speak,” Dow added.