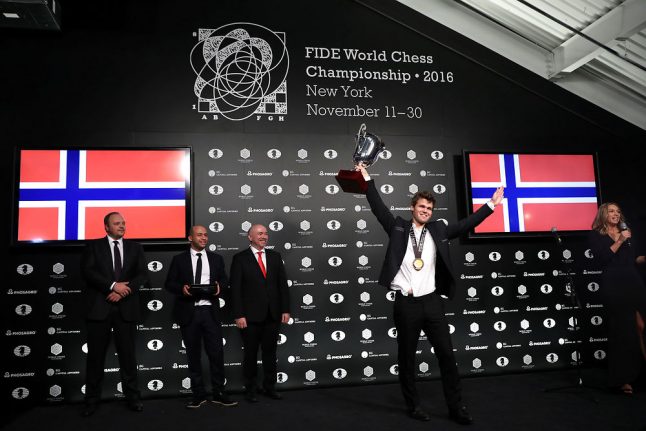 Carlsen's win was celebrated widely throughout Norway. Photo: Mark Kauzlarich/Scanpi
“A tour de force,” said historian and chess expert Hans Olav Lahlum.
“Some people are today talking about (chess legend Garry) Kasparov and Carlsen as two of the greats” in chess, Lahlum told Norwegian television TV2. “In my opinion, Magnus needs to win more titles before surpassing Kasparov, but he's on track.”
Carlsen beat Karyakin on his 26th birthday to win his third straight world championship, in New York.
Locked in a tie after 12 regular rounds in which each player claimed a single victory, Carlsen defeated Karyakin in four quick-fire extra games, the chess equivalent of extra time in soccer.
The Norwegian thereby kept the crown he has held since 2013, dashing Russia's hopes of once again dominating the chess world.
'Nerves of steel'
In Norway, where Carlsen's games were broadcast on television in prime time, the victory grabbed the headlines on news websites.
Former prime minister and current Nato Secretary General Jens Stoltenberg, tweeted: “Congratulations, @magnuscarlsen! You have nerves of steel. As ([he first official chess world champion in 1886] Wilhelm Steinitz said: 'Chess is not for timid souls'.”

Congratulations, @magnuscarlsen! You have nerves of steel. As Wilhelm Steinitz said: “Chess is not for timid souls”. #CarlsenKarjakin

Hunkered down in thorny budget negotiations, current Prime Minister Erna Solberg admitted on Facebook that she “didn't manage to stay up until the end” but sent her “somewhat belated congratulations” to Carlsen.
While Russia has not claimed the title since 2007, the mood there was nonetheless upbeat.
“Our belief has returned that we are a strong chess country and are able to once again fight for the crown,” Russian chess federation head Andrei Filatov told Russian television.
By winning the eighth game before losing the 10th, “Sergei was able to dismantle the myth that Carlsen is unbeatable,” his mother Tatyana Karyakina told the Sport Express newspaper. “He showed the world that Magnus is an ordinary person, not a computer or a robot, and he can be beaten.”
“And the most important thing is that my son proved to himself that he can stand strong in most difficult situations and not be inferior, and in some ways superior, to Carlsen,” she added.
Carlsen, who became a grand master at the age of 13 — a year older than Karyakin — will again defend his title in 2018.
By Pierre-Henry DeShayes with Maria Antonova in Moscow