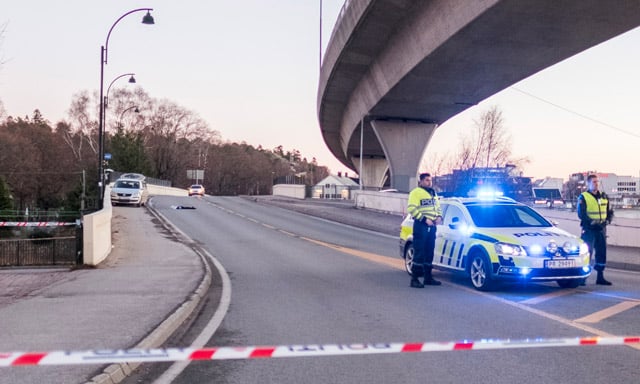 Officers at the scene of Sunday's fatal shooting. Photo: Tor Erik Schrøder / NTB scanpix
Police would not say how many shots they fired at the 35-year-old but according to local news source Fædrelandsvennen numerous empty cartridges were found at the site.
Police received tip-offs from members of the public about an armed man who was displaying threatening behaviour. Responding officers made the decision to arm themselves and said that the 35-year-old fired on them upon arrival.
“During a period of 17 to 18 minutes there were several contacts made between police patrols and the suspect. On one of these occasions he shot at police,” Agder police spokesman Bård Austad said at a Sunday press conference.
Austad said that the responding officers considered their lives in danger and shot the suspect. The two involved policeman will not be suspended and the case is being treated as the attempted murder of police officers.
The Norwegian Bureau for the Investigation of Police Affairs (Spesialenheten for politisaker – NBIPA) will fully review the incident.
“Our responsibility is to ascertain the background of the incident and to determine what actually happened, how many shots were fired and who shot them,” NBIPA spokeswoman Liv Øyen told TV2.
Police did not immediately release the identity of the man, but said that the 35-year-old was an ethnic Norwegian originally from Vennesla. He had four children and was described as an active hunter and weapons enthusiast.
He had a previous criminal record but the violations were several years old.
Sunday’s incident marked just the fourth time that police in Norway have been involved in a fatal shooting since 2002.
The most recent incident was in September 2015 when police killed a man in Stange Municipality who shot at officers. That marked the end of a nine-year stretch with no police killings.
A comprehensive report on the use of police firearms released prior to the September 2015 incident found that Norwegian police had only shot and killed two people since 2002, one in 2005 and one the following year.