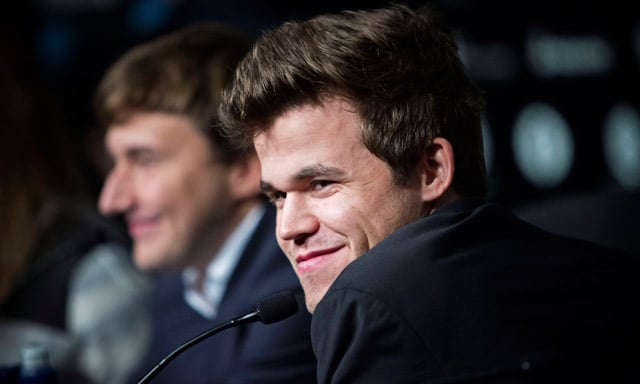 Carlsen, the defending champ, said he was "relieved and happy" after claiming his first win. Photo: Pontus Höök / NTB scanpix
Carlsen, the defending world champion, was under intense pressure at the outset of the game. But he quickly put Russian grandmaster Karjakin on the defensive, causing him to nearly ran out of time considering his moves.
Early in the match-up, it became clear that Carlsen had a good chance to claim his first victory in the 12-game tournament. The 25-year-old pressed against Karjakin’s defensive wall and after over 70 moves was able to secure the victory.
“I am very tired, but I'm terribly relieved and happy. Nothing is won yet, but it looks good now,” Carlsen told broadcaster NRK after the victory.
“It's been a long time since I've won a game. It was also very hard work today. There were ups and downs, but it finally went my way,” he said.
After ten matches, the overall score now sits at 5-5. With every draw, the players earn 0.5 points, while a victory is worth 1.0 point. The first to reach 6.5 points will be declared world champion and will take home €600,000 ($636,000). The loser will walk away with a consolation prize of €400,000.
The 11th game will be played on Saturday and if there is still a tie after the 12th game on November 30th, new matches will be scheduled.
The 26-year-old Karjakin said Thursday’s game was “an interesting match”.
“I didn’t want to lose, but it happens sometimes. I made a mistake,” he told NRK.
In another bit of good news for Carlsen, NRK reported that the Norwegian’s fine for refusing to participate in a press conference following his loss in game eight has been reduced from ten percent to five percent of his eventual winnings.
The 12-game tournament between Carlsen and Karjakin is remarkable not only for the youth of the two participants but because it is also the first world championship between players who came of age in the computer era, representing a generational shift in the game.
The battle has prompted comparisons with the 1972 showdown between American Bobby Fischer and the Soviet Union's Boris Spassky, two rivals in the Cold War-era whose showdown was dubbed the “Match of the Century.”