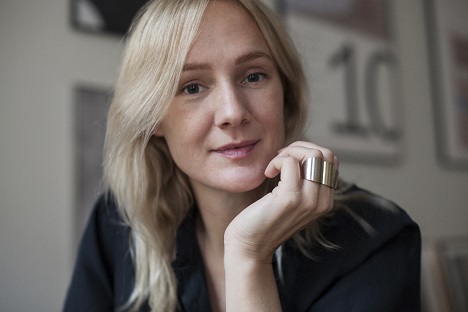 “It was some kind of family dinner, and when a relative asked me what I wanted to be when I grew up, I answered without a doubt,” Lina recalls. “And then they all started laughing.”

In one aspect, she realizes it’s not a big deal: “Of course you laugh when kids say something cute or funny.”

But for the little girl growing up in the Nordics who didn’t know any better, that moment meant a lot.

“I was dead serious. And then when everyone started laughing I felt like something was wrong, like I had miscalculated somehow,” she explains. “And I went back to my room and thought about it and realized, ‘Oh, you can’t be a prime minister if you’re a girl, duh, I’m so stupid!’”

More than 30 years later, Sweden is the only country in the Nordics that’s never had a female leader – despite being one of the top countries in the world for gender equality.

“It is truly surprising that I still have to tell my five-year-old self, ‘Not yet, honey’,” she observes.

But Lina is working hard to change that.

Not in the political sphere per se – she realized that becoming Prime Minister isn’t her true calling.

“There’s so much conflict in politics. I’m more of the ‘kumbaya’ type,” the grins.

She’s busy enough as it is not being involved in politics.

Lina has an impressive résumé: she's a columnist and a DJ; she was Nordic PR manager for Myspace, she's done PR for hit Swedish pop-star Robyn; and now she’s a host for Kobra, the longest-running culture and arts TV programme in the Nordics.

And early next year she will release her own book, an anthology aiming to correct world history by highlighting women who have done things “everyone should know about”.

But one of her proudest achievements is founding Rättviseförmedlingen (known as Equalisters in English), an equality project “aiming to correct the imbalances of representation in media, culture, business and other contexts”.

“It all started when I was at an awards gala where all the recipients were white men named Johan and Mats and Erik,” Lina remarks. “Since I knew plenty of people in those fields who were experts, I offered to help the organizers out next time, since maybe the problem was that they didn’t have time to find other people.”

The man she approached about it looked irritated at her suggestion and walked away.

“But later he came back with a bottle of champagne, and said, ‘Alright, Lina, let’s do this’,” she says.

Lina drank the champagne – naturally – and then went to a nightclub.

When she got home she realized the task was a bit too large for herself, so she turned to Facebook.

“I started a group called Rättviseförmedlingen, made a cup of tea – and suddenly 200 people had joined. And a few hours later we had a list of 130 female DJs.”

Since then Lina has realized that equality, or lack thereof, is something she’s been struggling against her whole life.

“They say that if you can see it you can be it. But the opposite of that is true, too,” she muses.

“It’s been a reoccurring theme in my life, realizing that these ideas I have, things I want to do, are ‘unsuitable’ for a girl or somehow unattractive. I’ve changed my route many times because of those barriers.”

Now she’s trying to show other people that those barriers aren’t real.

“I’m trying to change things in whatever way I can. To point out that women have walked down that path before; perhaps we just haven’t seen them and appreciated them for it. And every day I try to break down these barriers I my own life as well.” Lina is quick to point out that equality is about much more than gender.

“It wasn’t until the 1990s that I realized that equality and basic values shouldn’t be taken for granted,” she confesses. “I'm a child of the 70s. In the Sweden I grew up in, words like solidarity, equality, and community weren’t opinions – they were Sweden. They were us. They were law.”

In high school she had her first encounter with broad racist movements and other human rights violations which shocked her.

“I was surprised that there could be other basic ways of viewing the world than democratic equal rights for everyone,” she says.

But those views do exist, and inequality strikes people of all types.

“I think Nordic values, values of equality, exist, and we want to live by them. But we ignore job applicants based on their names. And we get hurt when we realize we’re not actually as equal as we think we are.”

And that’s one reason why she’s moved on from Rättviseförmedlingen – which now has more than 81,000 followers.

“Leaving Rättviseförmedlingen was one of the hardest things I’ve done, but also one of the things I’m the proudest of,” she states.

“I was there for four years and it kept getting bigger. People were demanding change in other fields where I didn’t have my own experience and didn’t feel brave enough to move things along. And I realized that if I wanted to be part of helping and changing the world for the better, the first thing I needed to do was take the microphone and pass it on to someone who could put it to better use. I created this movement, but it needs to keep moving.”

And Lina’s on the move too – literally and figuratively.

Working at Swedish public broadcaster SVT with the Kobra programme she gets to travel around the world, and she just moved to an apartment on the hip Stockholm island of Södermalm.

“There are still boxes all over the place,” she confesses. “And with work sometimes I could be at the office, or if we’re filming I could be in some tiny town in the northwest of Spain to talk to an expert about saving a painting, or going to Åbo in Finland to speak to queer activists.”

And though she can’t imagine a day when she won’t want to work with Kobra, she says she’s sure to move on when the time is right.

“As long as I’m the best person for the job I want to keep doing it. And if I’m not anymore, I’ll move on,” she declares.

But while Lina admits she herself, and Sweden, need to keep improving, she’s proud of both.

“I’m proud, being up here in the progressive corner of the world. We’re not there yet, but we’ve come a long way, and we continue to fight to be even better. I’m proud of Sweden. Why shouldn’t I be?”