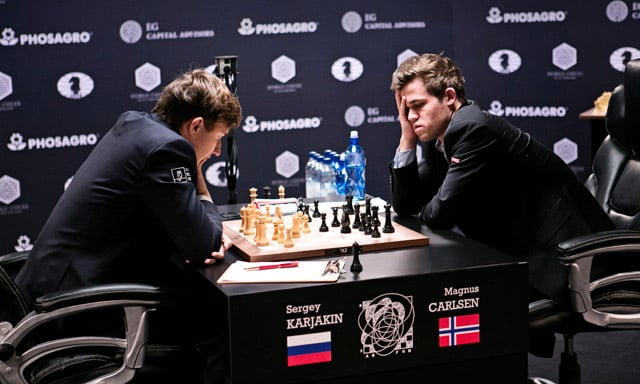 File photo from one of the earlier matches last week. Photo: Pontus Höök / NTB scanpix
The 25-year-old Norwegian, playing with white pieces, lost the eighth game in his 12-game showdown with Karjakin. It marked the first victory for either man, after the first seven matches ended in draws.
After the match, Carlsen went right past all the reporters in an interview zone before sitting down to attend the mandatory press conference. The young Norwegian sat and waited for Karjakin to finish speaking with reporters and come to the press conference before ultimately standing up and storming away before the formal questioning got underway.
The moment of frustration may cost Carlsen dearly. The regulations of the say that if a player does not show up for a press conference, which is one of the mandatory events in the World Championship, they will be punished with a fine of ten percent of the prize money.
That could mean a fine €60,000 if Carlsen ends up winning the tournament.
WorldChess.com, the official site of the showdown, said that “Carlsen’s play in Game 8 was altogether curious” and that the young Norwegian “clearly was feeling the pressure prior to the game “ and ended it “clearly furious with himself”.
Torstein Bae, a chess expert for Norwegian broadcaster NRK, said the game was the most uneven defeat in Carlsen's World Championship history.
“Karjakin won because he was the one who kept his cool,” Bae said.
“[Carlsen] is number one in the world and was a big favourite. Karjakin is ranked ninth and now leads. There is no doubt that Carlsen is not in top form,” he added.
Bae said that how Carlsen responds to the loss and his post-game meltdown will be “a test of his manhood”.
“He is now 25 years old, so perhaps it is time that the test comes,” he said.
Heading in to Wednesday’s ninth match-up, Karjakin has 4.5 points to Carlsen’s 3.5. With every draw, the players earn 0.5 points, while a victory is worth 1.0 point. The first to reach 6.5 points will be declared world champion and will take home €600,000 ($636,000). The loser will walk away with a consolation prize of €400,000.