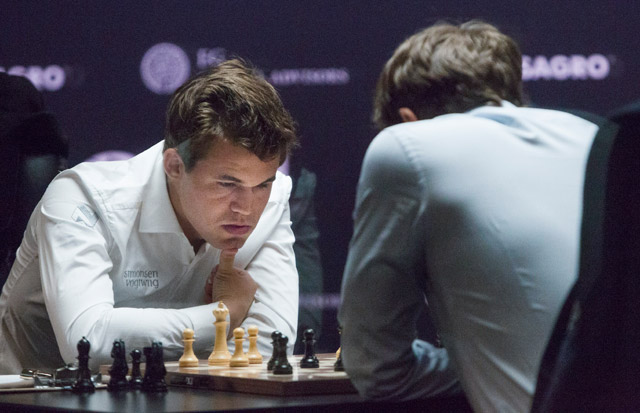 Norway's Magnus Carlsen plots his next move against Russian Sergei Karyakin. Ole Berg-Rusten / NTB Scanpix
Experts say Carlsen, who is favored to win, was put in difficult positions during the two matches held Friday and Sunday, but Karyakin was unable to capitalize and convert his advantage into a checkmate.
“The last two games have not been so interesting,” Carlsen said on Sunday, but, he added: “anything can still happen.”
The tournament is being followed in-person by hundreds of fans, many of whom have traveled to New York specially for the matches.
With every draw, the players earn 0.5 points, meaning after seven draws Carlsen and Karyakin each have 3.5 points. A victory is worth 1.0 point.
The first to reach 6.5 points will be declared world champion and will take home €600,000 ($636,000). The loser will walk away with a consolation prize of €400,000.
If there is still a tie after the 12th game on November 30th, new matches will be scheduled.
The tournament is remarkable for the youth of the two players: Carlsen is 25 and Karyakin is 26.
It is also the first between players who came of age in the computer era, representing a generational shift in the game.
The battle has prompted comparisons with the 1972 showdown between American Bobby Fischer and the Soviet Union's Boris Spassky, two rivals in the Cold War-era whose showdown was dubbed the “Match of the Century.”