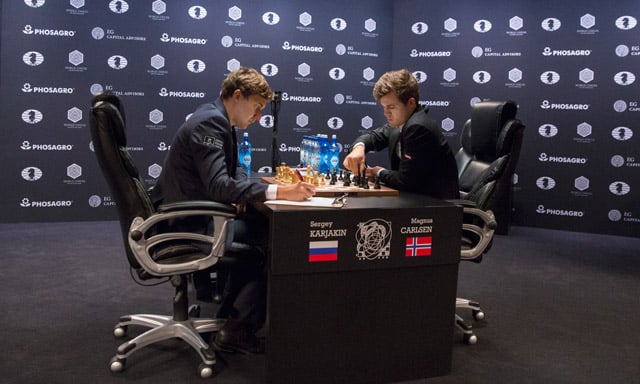 The epic showdown stood at 2-2 heading into Wednesday's rest day. Photo: Ole Berg-Rusten / NTB Scanpix
Karjakin began game four aggressively before making a mistake that sent Carlsen on the warpath.
The Norwegian pushed hard for a victory but after the 92-move match Carlsen had to once again settle for a draw with his Russian counterpart.
“Something I have as a chess player is that I have no faith in fortresses. I would like to find a sure way to win, and I thought I had it, but he had a fortress that I failed to break down. So I burned myself on it today,” Carlsen told broadcaster NRK.
The showdown between Carlsen and Karjakin now stands at 2-2 after the first four matches ended in draws.
“Both yesterday and today I’ve wasted opportunities to win, so I do not know how many I’ll get. I don’t have a strategy to wear him out, I have a strategy to play well,” Carlsen said.
The 12-game showdown is billed as the youngest ever in terms of the players' cumulative ages: Carlsen is 25 and Karjakin is 26. It is also the first between players who came of age in the computer era, representing a generational shift in the game.
The tournament has prompted comparisons with the iconic 1972 showdown between American Bobby Fischer and the Soviet Union's Boris Spassky, two rivals in the Cold War-era whose showdown was dubbed the “Match of the Century.”
Wednesday is an off day but Carlsen and Karjakin will sit down for game five on Thursday.
The two players will split the $1.1-million prize, with the winner getting three-fifths of the purse and the loser getting the rest.
Carlsen has been called the “Mozart of Chess,” and has inspired wide interest in chess in Norway since first winning the title in 2013. He has picked up endorsements and deals that earn him some $2 million a year.
He has a huge fan following, has done modelling and launched his own app called Play Magnus.
Karjakin, currently ranked ninth in the world, was born on Ukraine's Black Sea peninsula of Crimea, annexed by Moscow in 2014. He struggled with finding sponsors before moving to Russia in 2009 and becoming a citizen.
While he became the youngest grandmaster in history at just 12 years old, Karjakin admitted it would be hard to beat Carlsen, who is known for his relentless attacks and staying confident under pressure.