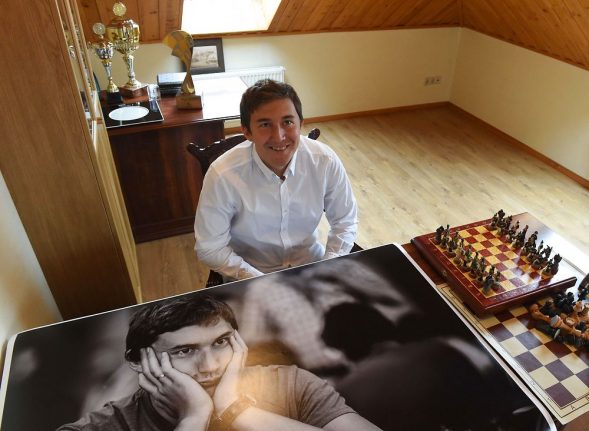 Russian grandmaster Sergei Karyakin looking on during an interview with AFP at his home outside Moscow. Photo: VASILY MAXIMOV/AFP/SCANPIX
The €600,000 (5.4 million kroner, $660,000) match in New York will be the youngest ever by cumulative age for the biggest crown in chess, with Carlsen, 25, favourite to beat challenger Karyakin, 26.
“It is a very, very long time since we have had a match where the players are the same age,” Russian chess legend Anatoly Karpov told AFP.
The 12-game face-off — which runs until November 30 — comes as ties between Russia and the West have plunged to their lowest depths since the fall of Communism over the crisis in Ukraine and the war in Syria.
And that has inevitably sparked comparisons with the famous 1972 showdown — dubbed the “Match of the Century” — that saw American Bobby Fischer best the Soviet Union's Boris Spassky in a meeting billed as pitting the two rival superpowers against each other.
“Back then it was the USSR versus the US, and now it's the European Union and the US and their sanctions against Russia,” the controversial Russian head of the World Chess Federation Kirsan Ilyumzhinov said in the run-up to the match.
'No weaknesses'
Despite the hype surrounding the game, the rivals are firmly focused on the match ahead.
“This is the first time that two players who have come of age in the computer era are fighting for the title and represents a generational shift in chess,” the world chess federation FIDE's website for the encounter says.
Ranked ninth in the world, Karyakin holds the record as the youngest ever chess grandmaster after claiming the title aged just 12 years and seven months. Carlsen is number three on that list, after becoming a grandmaster at 13.
The Russian qualified for the world championship in March by upsetting third-ranked Fabiano Caruana of the United States at the Candidates' Tournament in Moscow.
He admitted to AFP that world number one Carlsen — who has dominated chess since taking the title in 2013 — has “practically no weaknesses”.
While Carlsen has enjoyed the backing of some major names in the West including Microsoft, Karyakin's path has been a little more circuitous.
Karyakin was born in 1990 on the Crimean peninsula, which was then firmly part of Ukraine. He stumbled upon the game as a five-year-old when he saw a chess-themed commercial on television.
Eventually though he left Ukraine for Moscow, where he received a Russian passport and generous state support. He has supported Moscow's 2014 annexation of his home region.
'Most interesting'
Kirill Zangalis, a spokesman for the Russian chess federation, told AFP that the match looked set to be “the most interesting” since the epic all-Soviet slugfest between Garry Kasparov and Karpov that lasted over five months from 1984 to 1985.
While back in the Soviet period chess victories were used as a major propaganda tool for the Communist system as it sought to prove its superiority over the decadent West, after the end of the Cold War the game suffered from neglect in Russia.
Zangalis said that chess has undergone a resurgence in recent times, however, and “this year the Russian federation has registered a record number of chess clubs.”
President Vladimir Putin's spokesman Dmitry Peskov is travelling to New York to support Karyakin in his capacity as chairman of Russian chess federation's supervisory board.
“It'll be an act of support,” Peskov told Interfax Wednesday, denying plans to hold any diplomatic meetings with US officials just days after a stunning presidential victory by Donald Trump.
While Karyakin may face a tough task in bringing the title back to Russia, the clash with Carlsen still looks set to draw attention to the game — with glitzy online coverage including virtual reality broadcasts and 360-degree videos.
But Karpov warns the format means there are unlikely to be any fireworks.
“With a championship in just 12 games the players can't take any risks,” he said.
By AFP's Anaïs LLobet and Marina Lapenkova with AFP's New York office