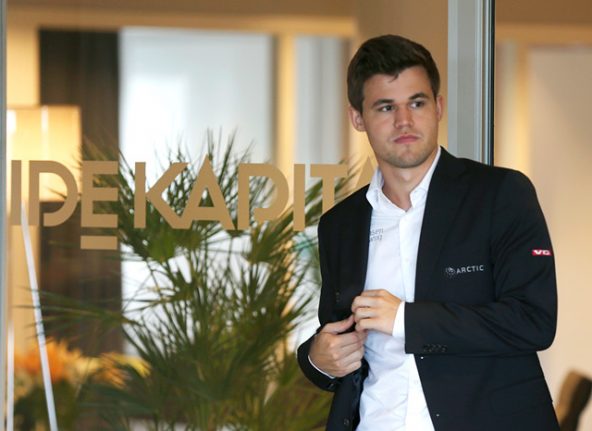 Carlsen at an Oslo press conference earlier this year. Photo: Vidar Ruud / NTB scanpix
Interest in chess in the Nordic country has skyrocketed since the photogenic 25-year-old international grandmaster took the game's global throne in 2013.
International chess master Atle Gronn described enthusiasm among Norwegians for the game as “completely crazy”.
“Chess is associated with intelligence, or a narrower activity. Thanks to Magnus Carlsen, it has gained a popular image as well,” Gronn told AFP. “He has a style that appeals very broadly, which also girls and women in the population find interesting.”
Carlsen faces Karyakin in New York from November 11-30, in a €600,000 (5.4 million kroner, $660,000) match some are hyping as a clash between East and West that echoes the Cold War.
Cold War parallels
The showdown has drawn parallels with the 1972 world championship match between American grandmaster Bobby Fischer and Soviet star Boris Spassky as it comes during another surge in tensions: this time over Ukraine and Syria.
Carlsen has his homeland right behind him as the world championship will be broadcast primetime on Norwegian national television, while numerous books have been published on him and on the game.
A Norwegian documentary about Carlsen will also be released in New York movie theatres on November 18th, as the competition heats up.
But he wasn't always so popular: Carlsen has told of how he was bullied by other students in the ninth grade at school.
“I am in one sense an outcast because I am very different from the rest of the class,” he said at the time. “It is difficult to be cool when I play chess.”
Child prodigy
Introduced to chess by his father, Carlsen showed off his photographic memory as a toddler.
At the age of two, the self-taught prodigy knew by heart all the car brands and later memorised the long list of all Norway's municipalities, with their flags and administrative centres.
He played in his first tournament at the age of eight and burst onto the chess scene in 2004, at the age of 13, when “The Mozart of Chess” was born, according to the Washington Post at the time.
That was the year Carlsen first defeated former world champion Anatoli Karpov, and pushed legendary chess champion Garry Kasparov to a draw in March. He became a grandmaster the following month.
Kasparov described Carlsen as a Harry Potter-type “super talent” long before the Norwegian superstar became the first Westerner to hold the world title since America's Fischer in 1975.
Carlsen quickly became a ruffled-looking regular of the chess circuit, his shirt untucked and at times yawning and stretching during games, while reading Donald Duck to relax between playing sessions.
He also won the Chess Oscars, awarded by Russian chess magazine 64 to the world's best player, for four consecutive years from 2009 to 2012.
A fashion model in his spare time, Carlsen made it to the Time magazine list of the 100 most influential people in the world in 2013.
Bigger than football
In 2013, Carlsen's long-held dream came true when he dethroned his Indian rival Viswanathan Anand as world champion.
During the chess world championship that year, there were more internet searches about the game than for football, according to the Norwegian chess federation, while Norwegian media reported that Oslo shops had sold out of chessboards.
Since Carlsen took the throne in 2013, the federation reported a 36 percent jump in the number of members.
Kristoffer Gressli, head of marketing and communications at the federation, called it the “Magnus effect”.
“The entire Norwegian population in three years has gone from being chess novices to knowing all the chess rules,” Gressli told AFP.
When Carlsen defended the title against Anand in a reprise game in 2014, some 2.76 million people in Norway — population five million — tuned in to watch on public broadcaster NRK, giving it higher ratings than cycling's Tour de France.
The federation now aims to offer a free introduction to chess to all schools in the country.
But shaping a future generation of talent is one thing and giving birth to a new superstar is a more complex move.
“I don't think that Norway will have a new Magnus Carlsen,” Geir Nesheim, the general secretary of the federation, told AFP. “He is so special.”