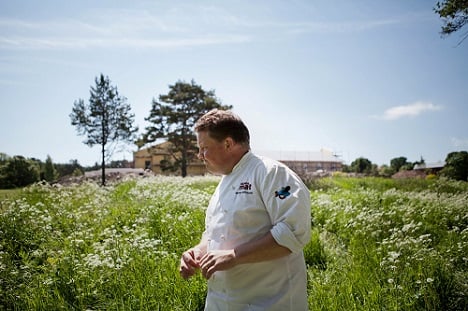 While the Åland Islands are an autonomous part of Finland, the 29,000 residents of the Baltic Sea archipelago speak Swedish. Throughout its history the islands have been handed over between Finland, Sweden – and even Russia – time and time again.

But while identity may be a complicated issue in Åland, food is not.

Even as a child growing up in the Åland Islands, Michael Björklund always knew exactly where his food came from.

And that connection to nature and the environment is a pretty good foundation if you want to become a chef.

“You learn the basics and every step along the way,” Björklund explains. “And my parents also had a food background, so I’ve been working in the kitchen my whole life.”

He catered his first dinner, for 65 people, when he was just 11 years old. And today Björklund is one of the most famous chefs in the Nordics.

“I learned the art of smoking food in Finland, and I learned the Swedish way of cooking in Gothenburg, where I worked with several star chefs,” Björklund recalls. “And then I worked for a while with fine-dining, but I didn’t like it. I like good food with real ingredients for nice people who come into the restaurant just to have fun. And that’s what we do best in the Nordics.”

In 2002, Björklund moved with his family back to Åland – “it’s the best place you can be as a kid” – and four years ago he opened Smakbyn, ‘Taste Village’.

“We started thinking about how to do something special on Åland. It’s a very small island, and we know all the producers – they’re our friends,” Björklund says.

That close connection from producer to plate is the foundation of Smakbyn.

“It’s not like a regular restaurant; it’s more like a small village,” Björklund explains. “You can come learn where the meat and fish comes from and how it’s prepared. You can speak with the chefs and then sit down and eat very nice things from right here on Åland.”

That means plenty of fish, lamb, pork, and vegetables. The key, he says, is to keep it simple.

“Our menu is very basic, but we use the best ingredients,” Björklund says. “Our perch fish is the best we can get, and we fry it with butter, perhaps with the great asparagus we have here on Åland. And we have our fresh home-grown nypotatis, and butter from the local dairy here on Åland, made just like in the olden days. You can taste the difference.” It’s the classic Nordic way of thinking and cooking – using local products whenever possible, following the seasons and enhancing sustainability. But of course that means the winter menu can be a bit of a challenge.

“In the winter we don’t have much to work with. We have carrots and turnips but not fresh herbs or things like that,” Björklund says. “But we use what we can get. The Baltic herring is wonderful in January, for instance.”

And Björklund’s respect for natural resources and sustaining the environment extends beyond fruits and veggies on his restaurant’s plates. He’s rethinking what types of fish can be eaten and enjoyed anywhere.

“There are a lot of Baltic fish that we don’t really eat here, like bream and sculpin,” Björklund explains. “The fishermen just throw them away. But I don’t like tossing food.”

Rather than wasting the undesired daily catch, Björklund and his fisherman friends are turning to other cultures to find those who do appreciate it.

“We’ve realized that customers from Poland, Romania, and Latvia tend to like that kind of fish. So maybe it’s possible to still make good food from it, sell it, and export it as something nice,” Björklund muses. “It’s a project I’m working on now; it’s not so big yet, but we’re trying.”

But even as the chef embarks on his own new culinary endeavors, he worries about the future of the Nordic kitchen.

“Nordic food is special in its simplicity, and Nordic chefs are incredibly skilled,” he says. “They can do anything. But many culinary schools are closing down. They’re not getting enough applicants. It’s a bit of a problem.”

Part of the issue is that young aspiring chefs are thrown into stressful restaurant environments before they’re ready, he says.

“Some start culinary school when they’re very young, and it’s a three-year commitment. That’s a long time for a young person,” he says. “And then they see behind the scenes at a restaurant, and people are screaming and running around, and they say, ‘Oh, shit, this is crazy.’ They get scared.”

And Björklund admits that to succeed in the business you do have to be a little bit… different.

“But it’s rewarding. Especially here on Åland. When you come here, you can really taste Åland. We might be small, and we can’t do everything – but what we do, we do very well.” 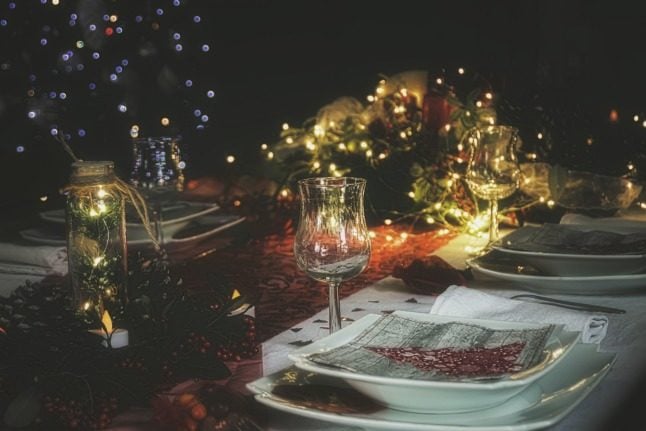 Here's everything you need to know about Norway's Christmas foods. Pictured is a table set for Christmas. Photo by Anthony Cantin on Unsplash

Pinnekjøtt (or ‘stick meat’) is a Norwegian favourite for families to enjoy on the juleaften (the evening of the 24th of December). A helpful hint, if you know you’re going to be eating pinnekjøtt for dinner in the evening, drink plenty of water throughout the day. The heavily salted lamb meat that is dried and then cooked again by being mounted on sticks in a bath of hot water is perhaps the saltiest tasting food in all Norwegian cuisine.

Ribbe, or “pork belly”, is often characterized by its rind. The crispier and crunchier the better. If you’re not hearing a local raving over how delightful pinnekjøtt is to eat on Christmas, it’s likely because they are raving over how delicious ribbe is. These two Christmas meals are arguably the most popular and often go head to head.

It may sound like an odd question to pose, but it is completely normal to ask a Norwegian co-worker or friend if they are team pinnekjøtt or team ribbe. You’ll likely be asked as well. So get a taste of both so you can pick your side and join in on the light-hearted battle.

Medisterkaker can be the star of your dinner plate or work well as a side dish. The recipes vary. Though traditionally, this hearty pork-based dish (typically in the shape of slightly flattened meatballs) is made with at least 25 percent pork fat. What makes them so Christmasy is the festive spice blend of added ginger, nutmeg, cloves, and pepper.

Kokt torsk or “boiled cod” is a traditional Christmas meal for households situated along the coastline. A firm line has been drawn between lovers and haters of kokt torsk. You’ll find very few Norwegians who claim this is their favourite Christmas meal. If you do find someone, the odds are that they grew up near the coastline, especially in the south of Norway. Traditionally, the mild-tasting fish is served with a clear butter sauce and boiled potatoes.

Lutefisk or  “Cod fish” is fisk preserved in “lye” or lut.  The dish that can best be described as fishy in its taste and odour is considered a traditional holiday dish. However, you’ll likely meet less than a handful of Norwegians that incorporate this meal into their Christmas dinner lineup. Instead, lutefisk is more popular with the older Scandinavians who immigrated to the United States. In fact, more lutefisk is consumed annually in the state of Minnesota than in Norway.

During the month of December, you’ll likely spot pepperkake everywhere! The crispy gingerbread cookie is available to grab on shop counters, passed out as gifts, and used to decorate windows. You can make your own. Though typically, it’s the store-bought versions that litter all offices and parities. Some Norwegians claim pepperkake is the ultimate taste of Christmas. But since it is so easy to find and eat often, many locals are relieved when pepperkake takes an 11-month hiatus after the new year.

What about the sides?

If you find yourself more excited by the sides of your main dish rather than the main protein, you might be disappointed during Christmas dinner. Norwegian Christmas side dishes are typically not the stars of the meal. In fact, one can go so far as to call them bland. You can expect peeled and boiled potatoes, boxed sauerkraut, spoonfuls of tyttebær sauce or “lingonberry” sauce, and more boiled potatoes. But that’s ok. Many find they are a nice equalizer next to the traditional Christmas foods that are fatty, salty, and have very distinct tastes.

On the beverage table

Aquavit – Aquavit is a Nordic favourite. The slightly spicy tasting spirit is distilled from grain and potatoes. Sipping on the strong liquid during Christmas dinner is a wonderful way to clear the palette from the extra fat and salt the meal contains.

Gløgg – Gløgg, Norway’s take on mulled wine, is served both as an alcoholic cocktail and a non-alcoholic beverage. The warm drink is slightly spicy in taste. And the aroma that exudes from the kitchen while gløgg is being heated up on the stove could melt even Scrooge’s heart.

Juleøl – Juleøl, or “Christmas beer”, is typically darker and fuller in taste than this pilsner loving country is used to drinking. As a result, you will find that the beer aisle has been taken over with famous nordic beer brands, such as Hansa and Ringnes, and their Christmas beers around the holidays.

Don’t forget to hunt for the almond

If you’re celebrating in a more traditional Norwegian household, you’ll likely find a cake in the spectacular shape of a small tower on the dessert table. This is Kransekake, and it is a traditional dessert both in Denmark and Norway. Kransekake is typically served on special occasions. Weddings, the 17th of May, and yes, Christmas. In addition to seeing kransekake served in all its glory as a towering cake, you can also find smaller bites of kransekake sold in the shops and bakeries during the holidays.

Kransekake aside, perhaps the most popular dessert served after Christmas dinner is riskrem. Riskrem or “rice porridge” is a creamy dessert served cold with a fruit-based coulis drizzled on top. What makes this dessert extra fun is the game traditionally played with it. A shaved almond is often hidden in the serving bowl filled with riskrem. And whoever discovers the almond in their bowl receives a traditional pig made out of marzipan as their prize.