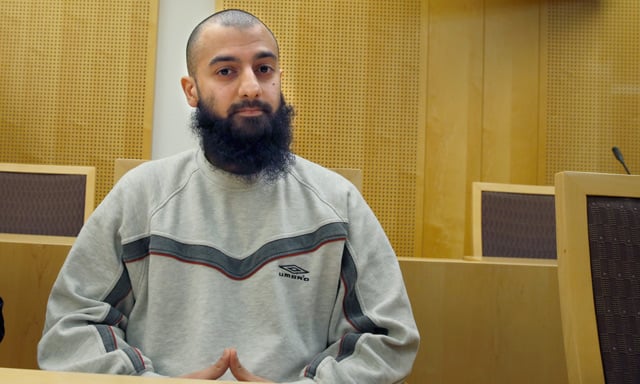 2015 file photo of Hussain. He did not give permission for photographers to attend his trial. Photo:
The 31-year-old denied the charges against him as his trial got underway in Oslo on Thursday.
Hussain is accused of recruiting terrorist and helping foreign fighters by providing both equipment and advice.
Also standing trial is a 19-year-old Norwegian Muslim convert who was arrested in Sweden last year after allegedly being assisted by Hussain.
With the exception of one point in the indictment regarding the possession of a stun gun, both defendants plead guilty on Thursday on all points.
Hussain turned up in Oslo District Court in light checkered shirt, closely-cropped hair and a newly-shaved face. Neither he nor the 19-year-old have agreed to allow photographers into the trial.
The trial is being held under extensive security measures.
Hussain, the founder and highly prolific spokesman for the militant Islamist group Prophet's Ummah, was first arrested along with documentary filmmaker Ulrik Imtiaz Rolfsen when they followed Hussain’s now 19-year-old co-defendant to Landvetter Airport in Gothenburg last summer.
According to the Norwegian Police Security Service (Politiets Sikkerhetstjeneste – PST), Hussain was helping the man join the terror group Isis in Syria.
Hussain is believed to have made travel arrangements for his co-defendant and at least one other person who either successfully joined or attempted to join Isis in Syria.
Hussain's role allegedly entailed advice on the itinerary, the procurement of proper equipment and the full or partial purchase of travel tickets, as well as the passing on of contact information for Isis-associated individuals.
Hussain is accused of having communicated with Isis personnel to ensure that the travellers were picked up and transported across the border from Turkey to Isis-controlled areas in Syria.
In February 2014, Hussain was sentenced to 120 days in jail for making threats. He was charged with inciting terrorism and praising acts of terrorism for posting a photo of convicted terrorists on his Facebook page in 2013, but was acquitted by the Oslo District Court.
Six weeks have been set aside for the trial.