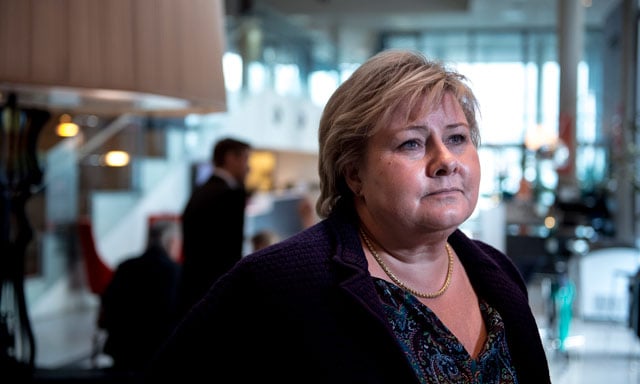 PM Erna Solberg said she couldn't remember whether she had spoken with Trude Drevland while she was under investigation for corruption. Photo: Carina Johansen / NTB Scanpix
The former mayor of Bergen had her telephone bugged by police while she was under investigation for corruption and Prime Minister Erna Solberg said she can’t rule out that she may have been on the other end of the line.

Former Conservative mayor of Bergen, Trude Drevland, is out with a new book detailing her involvement in a scandal over her failure to declare a luxury trip to Venice on the private jet of the ship owner Torstein Hagen.

In the book, Drevland reveals that Oslo police bugged her telephone for a period in autumn 2015. Investigators listened in on phone calls ahead of the local elections, when Drevland was still mayor and an important figure within Solberg’s Conservative party.
While it is unknown whether police directly listened in on any conversations between the two politicians, Drevland has previously said that the PM was very supportive of her as she faced corruption charges.
Solberg told Bergens Tidende that she could not recall if she had spoken with Drevland via telephone during the period in which police officers were listening in.
“I think any contact was via SMS. I certainly sent her a message after election night and can’t remember that we spoke together. But I'm not sure. Regardless, I stand by any conversations I have,” she said.
Whether a conversation with the PM was caught on police tape or not, Drevland’s lawyer, John Christian Elden, told Bergens Tidende “it is very extreme to have the mayor in Norway’s most important city bugged in the days before an election”.
Drevland and Elden have been given insight into which phone calls were tapped but are bound by a confidentially agreement to not disclose any information about the involved parties. Drevland made the eavesdropping revelation while promoting her new book. Photo: Berit Roald/NTB Scanpix
Drevland first ran into trouble in June 2015 after it emerged that she had been flown to Venice on ship owner Hagen’s private jet. It was later revealed that she had accepted a week-long cruise to Istanbul upon Hagen’s cruise ship, Viking Star, but later cancelled the trip.
Drevland went on sick leave for over two months as the scandal unfolded over the summer of 2015 and when police opened a case against her on August 31st, 2015, she stepped down as mayor.
A few weeks later, police announced that Drevland and Bergen city official Inge Tangerås, who was also involved in the Venice trip, were under investigation for gross corruption.