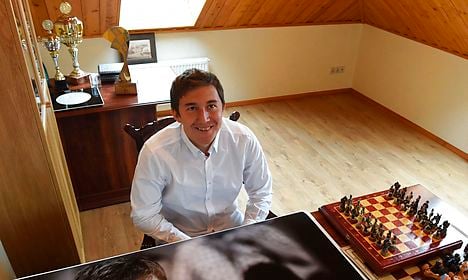 Sergie Karyakin is out to prove that "no one is unbeatable", not even Magnus Carlsen. Photo: Vasily Maximov/Scanpix
“He has to prove that he's better than me,” Karyakin told AFP. “If he tries too hard, I can beat him on the counterattack. That's my plan.”
Next month Karyakin will have his stab at dethroning Carlsen, 25, in New York as he takes on the Norwegian phenomenon in a €600,000 ($668,000) match some are hyping as a clash between East and West that echoes the Cold War.
The showdown, the youngest ever by cumulative age, has drawn parallels with the 1972 world championship match between American grandmaster Bobby Fischer and Soviet star Boris Spassky as it comes during another surge in tensions: this time over Ukraine and Syria.
“We want to bring back the chess fever of the Fischer-Spassky era,” Kirsan Ilyumzhinov, the Russian president of the World Chess Federation (FIDE), told reporters in Moscow.
“Back then it was the USSR versus the US, and now it's the European Union and the US and their sanctions against Russia.”
From Ukraine to Russia
For Karyakin the geopolitics surrounding the match could have a special dimension.
Born on the Black Sea peninsula of Crimea, he grew up playing for Ukraine until he moved to Moscow seven years ago and took Russian citizenship.
But despite supporting Moscow's takeover of his home region from Ukraine in 2014, he dismisses any comparisons with the Spassky-Fischer clash and insists its all just a matter of sporting pride.
“I don't see the same kind of rivalry,” said Karyakin, who shied from discussing politics further. “But of course we all want to show that our chess school is stronger.”
Ranked ninth in the world, Karyakin qualified for the world championship in March by upsetting third-ranked Fabiano Caruana of the United States at the Candidates' Tournament in Moscow.
The youngest grandmaster in history at the age of 12 years and seven months, Karyakin was a stronger player than Carlsen as a child but now admits that he is the clear underdog against an opponent he says has “practically no weaknesses”.
Carlsen has lost only two of 27 games against Karyakin since late 2007. Magnus Carlsen at the Norway Chess 2016 tournament earlier this year. Photo: Carina Johansen/NTB Scanpix
The pair have known each other for while — sparring together over the board — and Karyakin jokes they enjoy “diplomatic relations” and sometimes talk by Skype.
And while Carlsen has enjoyed the backing from some major names in the West including Microsoft, Karyakin's path has been a little more circuitous.
“He had strong support,” Karyakin said of his opponent. “He could train with Garry Kasparov and other top world chess players. He had it easier than I did.”
Karyakin grew up in Simferopol, the regional capital of Crimea. He stumbled upon the game as a five-year-old when he saw a chess-themed commercial on television.
“I asked my father what a pawn and a queen were,” Karyakin said. “We started playing that night.”
After showing his talents he moved elsewhere in Ukraine but eventually he realised that the opportunities were limited at home and moved to chess giant Russia.
Karyakin moved to Moscow in 2009 at the invitation of the Russian Chess Federation. He received a Russian passport, generous state support and the chance to train with the best.
“It's the best chess city in the world,” he said. “Here you can just call up a grandmaster, meet him, play and exchange thoughts.”
'Born with computers'
When he trains with the Russian national team, Karyakin practices at least six hours a day, immersed in chess computer programmes with an entourage of least five coaches.
One of them is Yuri Dokhoian, a Soviet grandmaster who trained chess legend Garry Kasparov for a decade.
“Very few thought Karyakin would make it through to the world championship,” Dokhoian told AFP. “He showed his combativeness.”
Karyakin and Carlsen, both born in 1990, are part of a new generation of chess players whose training relies heavily on computer software, revealing moves that would not necessarily have occurred to them.
“They were born with computers. This leaves its mark,” Dokhoian said. “They play a very similar game. They have strong technique, good openings and make quick decisions.”
And while the Russian admits he is clearly not the favourite, he is hoping that he might be able to turn the tables this time.
“I still think he can be beaten,” Karyakin said. “No one is unbeatable.”