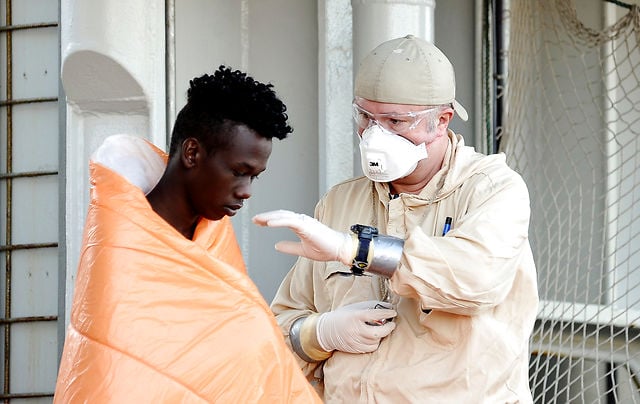 A migrant disembarks from the Norwegian vessel Siem Pilot in the Sicilian harbour of Palermo, Italy. Photo: Stringer/Scanpix
These bearded modern Vikings don protective suits and life jackets and brace for a mammoth nighttime mission that will see them transfer hundreds of people from an oil tanker, pluck others off unseaworthy boats, and help a woman give birth.
“Our mission is border control, but saving lives comes above everything,” Pål Erik Teigen, the police officer in command of operations who heads the crew, told AFP during a week-long embed.
The vessel, part of the European border agency Frontex's Operation Triton, started life as an oil platform supply ship in the North Sea but now patrols the Mediterranean on the look-out for human, drug or weapon smugglers.
While suspected illegal activities will be flagged up to the Italian authorities, the Siem Pilot is not built for high-speed chases and does not have the authority to board suspect vessels. But what it can do — at over 80 metres long — is host a lot of rescued migrants. The Norwegian vessel brought on over 1,000 migrants in a rescue mission last week. Photo: Kripos/NTB Scanpix
See also: Norwegian ship rescues 2,400 migrants amid 'chaos'
Most of the rescues take place on the border between Libyan and international waters but Frontex vessels are not deployed there so as not to act as a draw for departures.
Ships run by NGOs usually pick up the migrants, and call for back up when needed. That is when the Siem Pilot and its crew of policemen, coast guards and civilians, springs into action.
Part of Triton since April 2015, its crew members serve month-long missions before returning to Norway.
Rescue missions are often recorded and uploaded to YouTube by the National Criminal Investigation Service (Kripos):
Ditties under the stars
The fjords and snow-topped mountains may be a long way from the balmy Mediterranean, or the bustling Sicilian ports where the crew take rest days, but the team encounter glimpses of home where they least expect it.
“We've actually had some migrants on board who speak some words of Norwegian because they have relatives in Norway they hope to join,” says Borre, 41, an intelligence officer on board who could not give his last name as he works undercover.
Ole Hadland Gjertsen, a 26-year old diver who is on his sixth mission with the Siem Pilot, is a cycling enthusiast who regularly brings his bike with him on board so he can take it for a spin on rest days, from Malta to the Amalfi coast.
A previous crew member left a guitar and during the peaceful periods, those who are not playing video games or poker gather on the top deck under the stars to sing Norwegian songs.
Friday is taco night — just as it is for many in Norway — and each day kicks off with a hearty porridge, eggs and smoked salmon.
But when the alarm is sounded, the crews throws itself into preparing blankets, water and food bars for up to 1,100 famished, exhausted and scared guests, some of whom come aboard with serious medical issues.
Whistling to be saved
Tensions rise during a nighttime operation to transfer some 900 migrants from a tanker to the Siem Pilot, with the two police officers deployed to oversee the transfer, calling for back up when scuffles break out over life jackets on the oil-slicked deck.
The sound of whistles fills the air as those left on dinghies plead for help and the crew works tirelessly for over 40 hours.
In all, the Siem has hosted some 28,500 migrants on board since it began working under Frontex.
With the rescue finally complete, some head for their bunks to sleep. One will be woken soon: doctor Hans Christian Vik, 31, is called to deliver a baby, born prematurely and evacuated at dawn on an Italian coast guard boat.
“It was the second baby I have ever delivered, and the first was in a hospital with all the necessary resources for an emergency. This was very different,” he told AFP.
“But that's what we're here for,” he said.
There is only one task left, and it is a grim one. With a refrigerated container big enough to take 70 stacked bodies, it falls to the Siem Pilot to take on those who did not survive the journey.