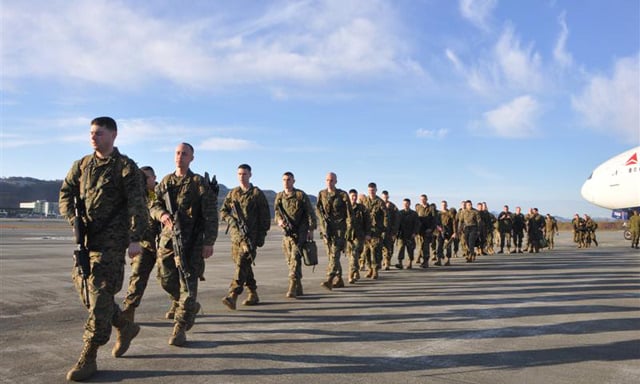 File photo of US Marines arriving at Værnes in 2012. Photo: Johannes Roaldsen Fürst/FLO
Norway announced Monday that 330 US Marines, to be stationed on rotation around 1,000 kilometres (600 miles) from the Russian border, will be engaged in training and manoeuvres from January 2017.
The announcement comes against a backdrop of increasing tensions between Russia and the West over the conflicts in Ukraine and Syria, although Norway itself enjoys good relations with its giant neighbour.
The American troops are to be based at Vaernes airport, which is close to Trondheim.
“[The] stationing of the US Marine Corps Rotational Force unit of around 330 troops at the Vaernes for sure won't make better [the] security situation in Northern Europe,” Maxim Gurov, spokesman for the Russia embassy in Oslo, told AFP in an email.
Norway, which admits its dependance on Nato to defend its territory, says the deployment is test run to be evaluated during 2017.
Some experts fear the move could exacerbate regional tensions.
Before joining Nato in 1949, Norway allayed Russian fears by pledging not to open its territory to foreign combat troops so long as Norway was not attacked or threatened with attack.
Norway's government argues that Nato troops are already training regularly in the country and that the deployment of troops does not equate to the opening of a permanent American base.
The US already has vast amounts of military equipment positioned in Norway — notably in tunnels dug into mountains — but no troops.
In July, Nato announced it would deploy, also on a rotational basis, four multinational battalions to Poland and to Baltic states to deter any Russian incursion.