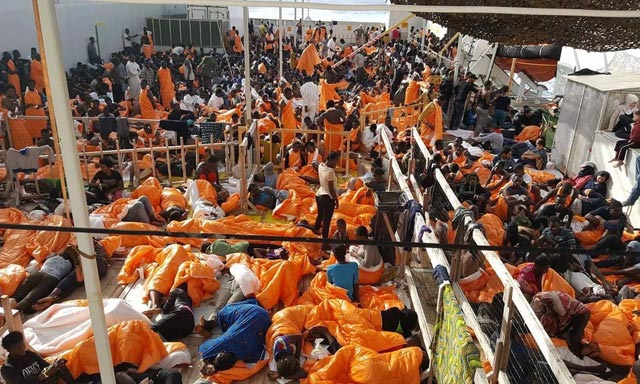 The Norwegian ship transported over 1,000 migrants while smaller lifeboats were used for others. Photo: Kripos/NTB Scanpix
Mission leader Pål Erik Teigen told NTB he’s “never experienced a similar rescue”.
“We were to transfer 1,000 migrants from a tanker over to Siem Pilot when suddenly several rubber boats appeared. It seemed completely hopeless,” Teigen said.
When the Norwegian ship, which was full of migrants, began to sail away, some 25 people jumped into the sea and swam after the boat in an attempt to come on board.
“They were given life jackets and lifeboats boats quickly picked up those who were in the water. There was no one who drowned,” Teigen said.
The Norwegian ship was on Sunday night en route to Palermo with 1,093 migrants on board. Seven people were evacuated for health reasons, and the ship has 17 dead people on board, Siem Pilot said in a statement.
‘Chaos’
With the Siem Pilot over capacity, additional lifeboats were used to transfer migrants from  their rubber boats to other civilian vessels.
Intelligence Officer Jan Erik Valen, who led the operation’s security detail, said there was a sense of panic amongst the migrants.
“There was chaos on board the tanker. They pushed us towards the end of the boat from all directions, and fought over life jackets. Police forces from Siem Pilot helped us with shields. We beat sticks on tubes to make as much sound as possible and we ended up having to hit some of them,” he said.
Birth on board
On Sunday morning there was also a birth aboard Siem Pilot. The migrant mother and her newborn child were immediately evacuated to the Italian island of Lampedusa for further care.
“It has been chaotic at sea with very many migrant boats. The crew of Siem Pilot has worked intensely – and we are very satisfied with the work we have managed to accomplish in recent days,” Teigen said.
The Siem Pilot is part of the extensive rescue efforts in the Mediterranean and is tasked with the mission of saving desperate migrants trying to reach Europe. During the weekend rescue, the ship also had to deal with human smugglers.
“There was a boat that was very aggressive all night. We used the ship's spotlight to scare it away, but they were determined to try to retrieve the boats we had rescued the migrants from,” says Teigen.
Italy's interior ministry said Friday that more than 146,000 migrants have arrived in the country so far this year.