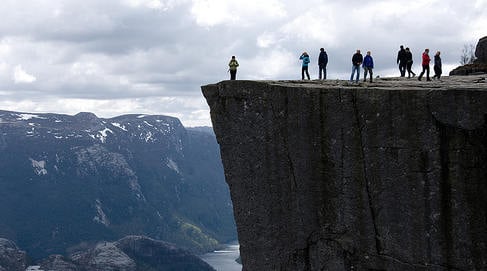 Preikestolen or 'Pulpit Rock' now draws some 300,000 visitors a year. Photo: LC Nøttaasen
Lasse Heimdal, leader of Friluftsliv, an umbrella organisation for those engaged hiking and other outdoor pursuits, said there was a risk that the huge spike in tourists seen in recent years would damage the most popular sites.
He argued that was “urgent that we now take measures to ensure that outdoor life is safeguarded”.
“If the large loads might damage nature, the authorities are obliged to impose countermeasures,” he told NRK. “Limiting access can be one of the measures.”
The number of people hiking up to Preikestolen (Pulpit Rock) has increased from 60,000 in 2009 to 300,000 today, while the number visiting the popular Trolltunga (Troll tongue) promontory has increased from 1,000 to a 100,000 over just five years.
The Norwegian Tourist Association in August called for new laws to be brought in empowering them to stop tourists climbing Pulpit’s Rock after a string of accidents.
The walk to Preikestolen is steep and takes up to three hours, and many tourists who embark on it come ill-prepared, and then defy warnings not to undertake the hike during cold and stormy conditions.
Norwegian People's Aid, which runs a rescue service near Pulpit Rock said it had carried out a record 34 emergency rescues this year, of which half involved tourists hiking up to the precipice.
Heimdal is leading an emergency meeting on the problem next week.
Url copied to clipboard!