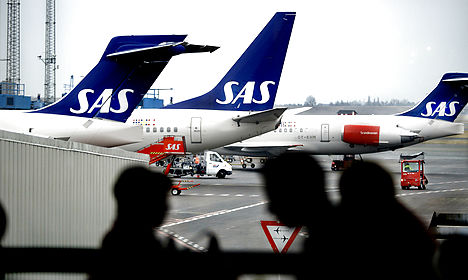 SAS passengers at Copenhagen Airport. Photo: Christian Als/Scanpix
The Norwegian pilot, who was in his 50s, was driven away by police after failing the test, but was released following a second test which showed his blood alcohol level was zero.
“The captain had a blood alcohol of 0.1 per thousand, which is within the legal limit,” Kristian Loraas, from the local police told VG. “But because there are stricter requirements for the those providing services in the air, we had to take him with us.”
The man was caught after police carried out a routine breath test on the plane’s crew.
Knut Morten Johansen, the head of SAS's media relations in Norway told The Local that as the second test had been negative, the pilot had been exonerated and would be allowed to return to work.
“It was a routine control which happened on this flight, and the first test showed that there was extremely small outcome of the test, but the second test showed that there was nothing. As I understand it, it's not a case any more. They don't have a case.”
Norway's air industry was shocked last year when the co-pilot of an Air Baltic plane was found to have a blood alcohol level of 1.35 parts thousand, more than seven times the legal limit.
Johansen said that a new pilot had been found at short notice and the plane had departed for Copenhagen with only a fifteen minute delay.
“In general we do support the police in carrying out regular testing, and it's very important to have a serious and strict policy regarding alcohol problems,” Johansen said.  “But in this case it's important to stress there was no alcohol involved: just minutes afterwards, it was tested with a better machine, and the result was 0.0.”