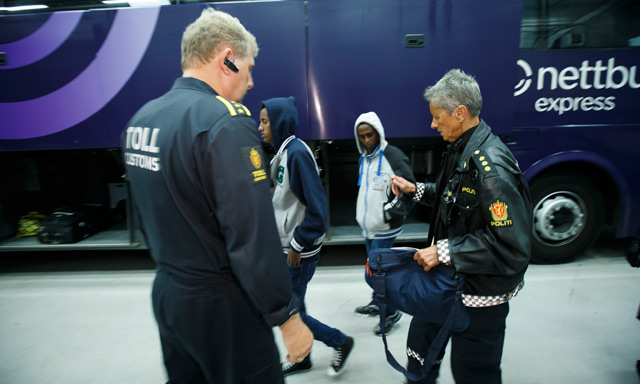 File photo of Norwegian police checking bus arrivals from Sweden. Photo: Heiko Junge / NTB scanpix
When the ministers of justice of the EU and the four EFTA countries meet in Luxembourg on Thursday, Anundsen will ask for the green light to keep Norway’s controls in place.
“I think it's important that we have the opportunity to continue with internal border controls as long as we believe it is necessary,” Anundsen said.
Norway is one of five Schengen countries that have introduced border controls in the wake of the refugee crisis.
The Norwegian border controls including checking all ferry traffic arriving from Denmark, Sweden and Germany. Control was introduced in November last year and has since been extended several times, most recently in May when it was extended by six months. The current measures are due to expire on November 12th.
Anundsen stressed that the government has not yet decided whether control should be extended again. But he said Norway must be given the opportunity to do so if it wishes.
“It is important for us. We believe the situation is still of such a nature that there is a continued risk that we may have major movements within the Schengen area,” he said.
Although asylum claims in Norway have plummeted, Anundsen said that attempts to slow the refugee influx at Schengen’s external borders “have not yet had as much impact as one might wish for”.
Before the meeting in Luxembourg, several of the countries with border controls have made it clear that they want a green light for extension.
Denmark's integration minister, Inger Støjberg, recently told Danish broadcaster DR that she will try to form “a common front” with Norway and the other countries that are in the same situation.
“I think we should prolong border control. There is still an uncertain situation in southern Europe, where thousands of refugees and migrants care coming ashore in Sicily. That can create pressure on Danish borders,” said Støjberg.
The other Schengen countries that have border control measures in place  are Sweden, Germany and Austria.
EU Immigration Commissioner Dimitris Avramopoulos has signalled that the five countries with controls should not count on be granted additional extensions. He said the EU’s objective is to return to normal.
“If there is an application to extend border control, we must consider it. If the extension is justified, we will grant it. But we are not there yet,” Avramopoulos said.