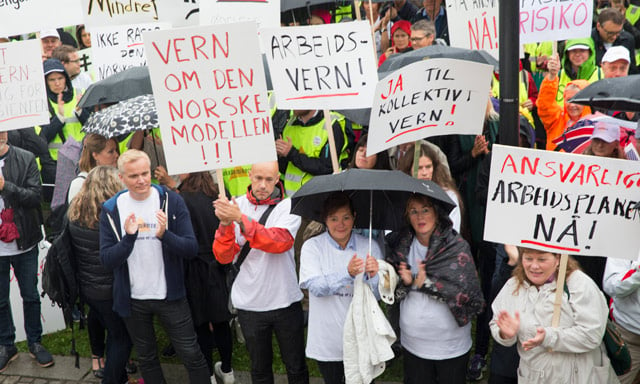 Striking workers protest outside of the parliament building in Oslo last month. Photo: Terje Bendiksby / NTB scanpix
If the additional 54 employees walk off the job as threatened, there will be a total of 682 workers on strike at 16 hospitals across Norway.
The work stoppage that began on September 7th is now being described as the longest-ever hospital strike in Norwegian history.
“After mediation on Wednesday was not successful, the confidence crisis in the hospitals was further worsened,” Akademikerne’s head negotiator, Rune Frøyland, said.
See also: Ongoing Norway doctors' strike intensifies
As the strike moves toward its sixth week, no agreement has been reached on how much say hospital employees should have in shaping work shifts at Norway’s health institutions.
Employer association Spekter has said that it is seeking more scheduling flexibility in order to plan how to use resources in the best way possible, while Akademikerne accuses Spekter of pushing for working time arrangements that are “irresponsible both for the workers and for patient safety”.
Striking workers include doctors, psychologists, engineers, lawyers, economists, social workers and dentists.
On Tuesday, Nordland Hospital in Bodø said it would not be able to fill all shifts with qualified medical personnel due to the ongoing strike. According to broadcaster NRK, the shortage could result in a forced arbitration.