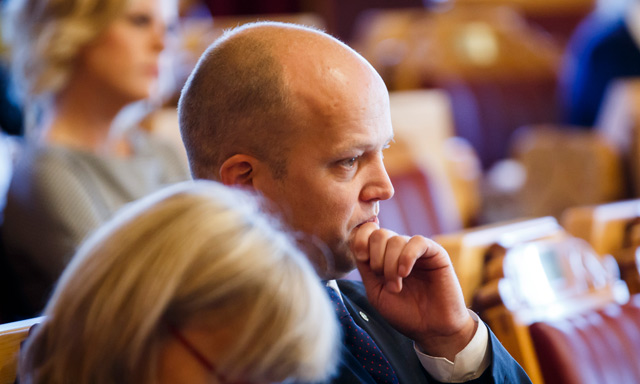 Centre Party leader Trygve Slagsvold Vedum said Norway should work closely with the Brits. Photo: Heiko Junge / NTB scanpix
Business daily Dagens Næringsliv reported that the UK’s international trade secretary, Liam Fox, lobbied his Norwegian counterpart, Minister of Trade and Industry Monica Mæland, for Norway to join the United Kingdom in establishing a task force to prepare a new trade agreement for when the Brits formally leave the EU.
But when Fox’s request was relayed to the Norwegian Foreign Ministry, it was rejected. According to Dagens Næringsliv, the ministry’s director general for European affairs, Niels Engelschiøn, thought that joining the UK in a special task force would jeopardize Norway’s European Economic Area (EEA) agreement.
Engelschiøn also determined that it would not be appropriate for Norway to enter into such an arrangement with the UK while it is still officially a member of the European Union.
Neither Engelschiøn nor the Foreign Ministry would comment on the newspaper’s report, while State Secretary Elsbeth Tronstad would only say that there is ongoing and dialogue between the UK and Norway.
Centre Party leader Trygve Slagsvold Vedum said, however, that he found it strange that Norway would not accept the offer to enter into a closer partnership.
“It’s as if Norway is more afraid of provoking the EU than it is concerned about Norwegian interests,” Vedum told Dagens Næringsliv, adding that the Norwegian government should more closely involve parliament in issues relating to Brexit.