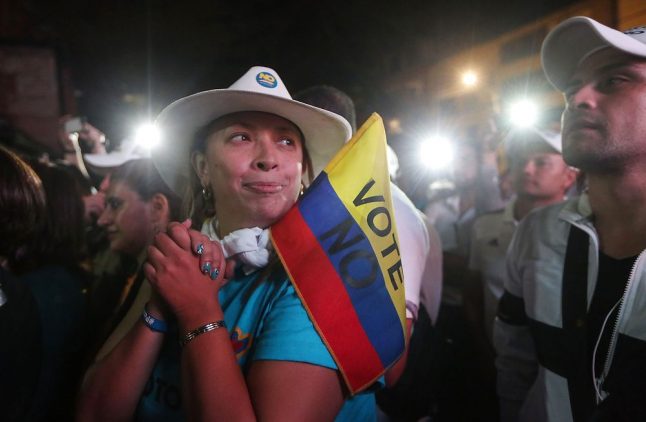 'No' supporters gather at a rally in Bogota following their victory in the referendum on a peace accord to end the 52-year-old guerrilla war between the FARC and the state. Photo: Mario Tama/Getty Ima
Colombia's government vowed to sustain its efforts to end the country's half-century civil war after voters handed it a shock defeat by rejecting a peace accord reached with the communist FARC rebels.
Resentful of the blood shed by the leftist guerrillas and the immunity the accord offers many of them from prosecution, voters on Sunday rejected the historic deal by a razor-thin margin, defying the government and flying in the face of opinion polls.
The result threw Colombia's future into uncertainty. The sides spent four years negotiating the deal and agreed it must be ratified in a referendum — but there was no Plan B in the event of a “No” vote.
President Juan Manuel Santos admitted defeat, but pledged: “I will not give in, and I will continue to seek peace to the last day of my term.”
FARC chief Rodrigo Londono, alias Timoleon “Timochenko” Jimenez, vowed his side was also committed to continuing peace efforts. He said its ceasefire remained in force.
“The FARC deeply deplores that the destructive power of those who sow hatred and resentment has influenced the Colombian people's opinion,” he said in Havana, Cuba, where the accord was negotiated.
“The people of Colombia who dream of peace can count on us. Peace will triumph.”
Also “very disappointed” was Børge Brende, foreign affairs minister of Norway, one of the countries actively supporting the peace process.
He told radio NRK that the accord supporters should “work in the next days to see if there are solutions to save peace in Colombia” by taking into account opposition to the deal.
Colombia's foreign ministry has asked Norwegian facilitators to remain in Havana to discuss alternatives with the FARC rebels.
Deadly conflict
The peace accord was supposed to end the last major armed conflict in the Western hemisphere.
But the late Sunday vote result was a dramatic defeat for Santos and the accord he signed with the Revolutionary Armed Forces of Colombia (FARC).
Commentators compared the result to that of June's surprise “Brexit” vote for Britain to leave the European Union.
Colombians voted 50.21 percent to 49.78 percent against the accord, according to results published online with more than 99.9 percent of votes counted.
The 'No' camp won by about 54,000 votes, or less than half a percentage point, electoral authorities said.
Surveys ahead of the vote had predicted a strong 'Yes' victory. Voting however was not mandatory, and turnout was low at just over 37 percent. Authorities said heavy rain caused by Hurricane Matthew in the Caribbean disrupted some voting.
Hatred of the FARC
Some FARC victims publicly backed the accord but forecasts apparently miscalculated Colombians' desire to punish the guerrillas.
Deal opponents resented concessions that included amnesty for some FARC members, though not for the worst crimes such as massacres, torture and rape.
“It is absurd to reward those criminals, drug traffickers and killers who have made the country a disaster for the past 50 years,” said 'No' voter Jose Gomez, a retiree of 70.
Monica Gonzalez, 36, celebrated the result in Bogota. She said the FARC killed her grandmother in 2011 and kidnapped some of her relatives.
“I agree with second chances, but not with impunity,” she said.
'Political crisis'
Former president Alvaro Uribe, who led the 'No' campaign, called for a “national pact” to work for peace. But it was unclear how peace efforts might move forward now.
“Hatred of the FARC won the vote,” said Jorge Restrepo, director of conflict analysis centre CERAC. “We have been cast into a deep political crisis with very negative economic consequences.”
'Yes' vote supporters who gathered for a victory party at a Bogota hotel were left in gloom.
“No one was prepared for this. There was no Plan B,” said Jorge Cifuentes, 55. “We do not know what will happen now, but it is clear that the conditions granted to the FARC had a big effect, and the low turnout too.”
For Rosario University analyst Arlene Tickner, the result is “an Uribe triumph.”
The popular ex-president considers Santos – his former defence minister – a traitor for negotiating with the rebels.
Deadly conflict
The accord called for the 5,765 FARC rebels to disarm and become a political party, with seats in Colombia's Congress.
Also covered was justice and compensation for victims, and an end to the cocaine production that has fuelled the conflict.
The FARC launched its guerrilla war on the government in 1964, after the army crushed a peasant uprising.
Over the years the conflict drew in several leftist rebel groups, right-wing paramilitaries and drug gangs.
Authorities estimate the conflict has left 260,000 people dead, 45,000 missing and nearly seven million displaced. 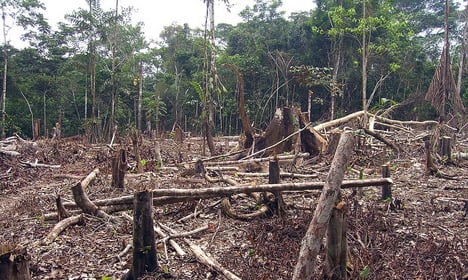