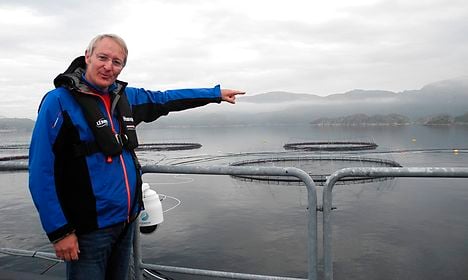 Henri Lapeyrere, the CEO of Leroy France, points to the nets of Leroy's aquaculture salmon farm in Hitra Bay, west of Trondheim. Photo: Céline Serrat/AFP/Scanpix
As an industry, the ocean-farming of salmon is only about 40 years old. But the harm it causes has been widely documented, ranging from spreading parasites to pesticide pollution, and escaped fish muddying the wild salmon gene pool.
“It cannot be said that with a million tonnes of fish produced in this country there is no impact,” admitted Henri Lapeyrere, a French representative of Norwegian aquaculture giant Leroy Seafood Group, on a visit to Hitra.
But things are slowly changing. At the Hitra plant, for example, cultivated salmon are fed a diet that is two-thirds plant-derived and one third fish meal and fish oil — a reversal of the previous ratio, in a bid to limit depletion of marine resources.
To combat disease in the animals, “thanks to the vaccines we administer to each salmon, we hardly need to use any antibiotics any more,” Lapeyrere added.
And instead of using the anti-lice pesticide diflubenzuron — banned by the European Union but allowed by Norway — the farm uses tiny, parasite-eating fish instead.
These steps follow guidelines set by the Aquaculture Stewardship Council (ASC), a non-governmental body created in 2010 to encourage responsible seafood farming with as little impact as possible on water quality and wildlife.
The council dispenses labels for responsibly-farmed fish, a crucial source of abundant and healthy food for a human population expected to grow from about 7.5 billion today to 11.2 billion by the turn of the next century.
Leroy's Hitra facility alone raises more than a million salmon at any one time.
It is one of more than 300 fish farms around the world vetted by the ASC — covering about a million out of 66 million tonnes of seafood farmed every year. Aquaculture fertilization tanks at Leroy's plant in Hitra. Photo: Céline Serrat/AFP/Scanpix
Some way to go
Once a luxury food, demand for salmon — rich in supposedly heart-healthy Omega 3 fats — has exploded since the 1980s, especially in the United States, Russia, Europe and Japan, according to conservation group WWF.
Fish farming, or aquaculture, supplies about two-thirds of all salmon that land on dinner plates today.
According to the Food and Agriculture Organization (FAO), the practice of raising Atlantic salmon in freshwater for release into the wild started in 19th century Britain, a bid to boost stocks for anglers.
Sea cage culture was first used in the 1960s in Norway to bring Atlantic salmon to marketable size, a practice which fast spread elsewhere.
In nature, the fish hatch and spend their first year or so in freshwater before moving seaward to feed and grow. Once mature, they return to rivers and swim upstream to spawn.
Farmed fish are hatched in freshwater tanks before being moved to large cages or nets in the ocean to fatten up before being harvested.
Some 2.3 million tonnes of the most popular type, Atlantic salmon or “Salmo salar”, are farmed every year — about 1.2 million tonnes by Norway, which exports 95 percent of its production, according to Karoline Andaur of WWF Norway.
That tonnage doubled between 2005 and 2014, even as national and global efforts to limit the environmental impact have scaled up.
Salmon farms spread parasites such as sea lice, while pesticides threaten other ocean creatures and plants.
Antibiotics, used to keep disease at bay, leach into the surrounding environment. This boosts the risk of drug resistance and can give rise to so-called super-bacteria.'
Stocks of wild fish harvested to feed salmon risk being depleted, and salmon excretions can smother life on the sea floor.
While welcoming the Leroy farm's efforts to limit the damage off Hitra, WWF sustainable fishing spokesman Selim Azzi said more must be done to “prevent the impacts of salmon escapes, persisting sea lice and damage to the ocean floor.”
For Andaur, salmon production should not be allowed to expand until certain practices are vastly improved. She also highlighted sea lice, which can attack juvenile wild salmon before their scales are fully developed and kill them.
“Producers still have a way to go,” she said.
About 30 percent of Norwegian salmon farmed today is certified by the ASC, council representative Barbara Janker told AFP.
Outside of Norway, the other major producers of Atlantic salmon are Chile, Scotland and Canada, all of which confront similar problems. 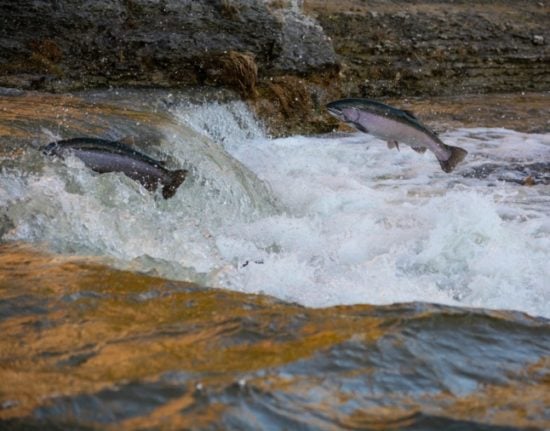 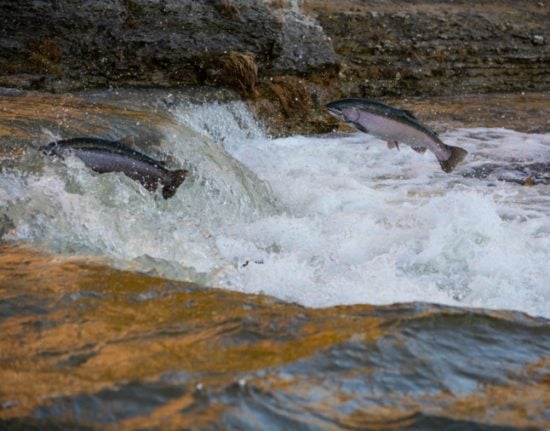