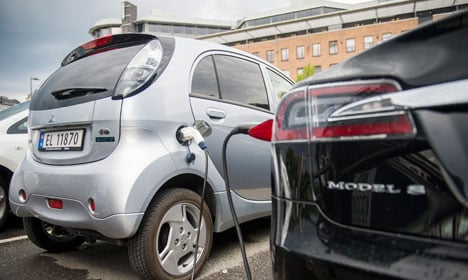 “Never has the market share of electric cars been as high as in 2015,” Christina Bu of the Norwegian Association for Electric Cars said.
Almost 26,000 zero emission cars — all of them electric except for nine hydrogen vehicles — were registered last year in the Scandinavian country, out of a total of 150,700 private new cars, the  information Council for Road Traffic said.
The most sold models were the electric version of Volkswagen's Golf, the Tesla S, Nissan's Leaf, the BMW i3 and the Renault Zoe.
In 2014, zero emission cars made up 12.5 percent of the Norwegian market.
The Scandinavian country is cementing its role as a pioneer in the field.
By comparison, in neighbouring Sweden green cars represented four percent of new car registrations last year, while in France they accounted for just 0.9 percent. Recently-released figures from Denmark showed that electric car sales there also boomed in 2015, spurred in part by a rush to purchase before the country's tax break on environmentally-friendly car expired.
Norway offers numerous incentives to encourage buyers to opt for green cars: while regular cars are heavily taxed, green car owners benefit from tax exemptions, and, under certain conditions, the use of collective transport lanes and free parking.
Authorities plan however to very gradually reduce some of benefits, controversial due to their high cost.
“The choice of a zero emission car has to remain profitable. The electric car market is still not viable without subsidies,” insisted Christina Bu.