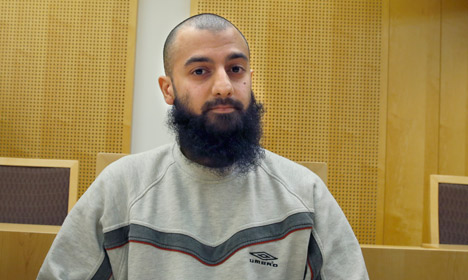 Ubaydullah Hussain has been in and out of the Norwegian court system several times. Photo: Terje Pedersen / NTB scanpix
The 31-year-old is believed to have helped advise would-be terrorists, purchase equipment on their behalf and distribute contact information for members of the Islamic State.
“He denies his guilt,” Hussain’s lawyer, John Christian Elden, said.
According to the indictment in his case, Hussain helped five specific individuals make connections to terrorists and recruited at least two converts to the Islamists’ cause.
Hussain is also charged with making travel arrangements for people who either successfully joined or attempted to join Isis in Syria.
Counselling
Hussain’s role allegedly entailed advice on the itinerary, the procurement of proper equipment and the full or partial purchase of travel tickets, as well as the passing on of contact information for Isis-associated individuals.
Hussain is accused of having communicated with Isis personnel to ensure that the travellers were picked up and transported across the border from Turkey to Isis-controlled areas in Syria.
One of the converts allegedly assisted by Hussain was a 19-year-old who was arrested in Sweden last year. The other, a 24 year old from Halden, was killed in the Syrian border town of Kobani in 2015. Both the recruitment and support of Norwegian Isis fighters is punishable under section 147d of Norway’s penal code.
Hussain has been detained since December 10th of last year and his trial is scheduled to officially get underway in Oslo District Court on November 3rd. The court has set aside six weeks for the case.
In February 2014, Hussain was sentenced to 120 days in jail for making threats. He was charged with inciting terrorism and praising acts of terrorism for posting a photo of convicted terrorists on his Facebook page in 2013, but was acquitted by the Oslo District Court.
When the Court of Appeal dealt with the appeal in early summer last year, he was again acquitted of inciting terrorism, but the threat verdict was upheld.