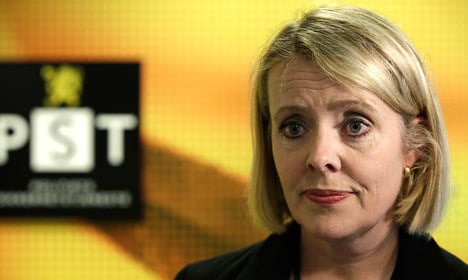 PST boss Benedicte Bjørnland. Photo: Vidar Ruud / NTB scanpix
The PST study attempted to investigate the backgrounds of people in extreme Islamist groups. Everyone in the representative sample study by the security service had been radicalized in Norway and all were under the age of 40.
A full 88 percent of the radicalized individuals have an ethnic background other than Norwegian and over 30 different nationalities are represented amongst the radicalized individuals. Some 76 percent of the extremists have Norwegian citizenship.
The vast majority, 88 percent, are men and 68 percent of those men have been either suspected, charged or convicted of a crime before they became radicalized.
“This is rather unique and something that only a security service with have full access could have made such an in-depth study,” PST chief Benedicte Bjørnland told TV2.
Converts over-represented
“The study confirms the pre-existing understanding of extreme Islamism in Norway as a multiethnic phenomenon, characterized by young men with low education, high crime rates and a loose attachment to the labour market,” PST wrote in the introduction to the report.
Converts to Islam represent 18 percent of the overall sample of extremists.
“We can see that ethnic Norwegian converts are over-represented and when we look at the profile of these people, we see the same vulnerability factors. Poor labor market attachment, poor school achievement and a low rate of high school completion, substance abuse and criminality have obviously made these people vulnerable to radicalization,” Bjørnland said.
The war in Syria
The PST study revealed that 73 percent of those included in the survey were radicalized after the conflict in Syria broke out. A full 61 percent immigrated to Norway when they were children or young teens and 17.5 percent have lost one or both of their parents before coming of age.
The survey also shows that Pakistanis and Somalis are underrepresented amongst extremists in relation to how many people with those nationalities are living in Norway.
According to PST, the investigation into the background of radical Islamists has revealed clear factors that ca be monitored to head off possible threats.
“This will likely contribute to making it easier for us as a security service to keep track of potential individual threats, primarily individuals with criminal records, school dropouts and people with substance abuse issues and only sporadic participation in the labour market,” PST wrote.