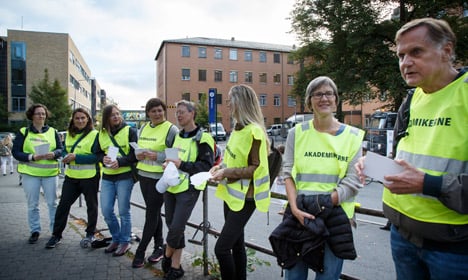 Striking workers outside of Ullevål Hospital on Wednesday morning. Photo: Heiko Junge/NTB Scanpix
Mediations between trade union Akademikerne and employer association Spekter broke down shortly after a 12am deadline on Wednesday.
As a result, 194 union members have walked off the job at hospitals in Oslo, Bergen, Stavanger and Finnmark. According to Spekter, around 100 of the striking workers are doctors.
An additional 119 union members at other hospitals will join the strike on Friday if the two sides can’t reach an agreement.
Oslo University Hospital said on Wednesday that patients with acute illnesses or injures would not be affected by the strike and that patients with appointments should meet up as planned.
In Bergen, the strike will primarily affect Kysthospitalet, where some planned operations have been postponed.
“We will contact everyone affected as soon as possible. Otherwise, patients should meet up as normal unless they hear otherwise,” Helse Bergen CEO Eivind Hansen told broadcaster NRK.
Østfold Hospital said that 23 doctors have gone on strike and that patients might have previous appointments rescheduled. Hospital officials said patients with immediate needs would not be affected by the work stoppage.
A spokesman for the striking doctors told NRK that Stavanger University Hospital might also have to reschedule appointments due to the strike.
Parties are far apart
The two sides were so far apart from each other in negotiations that mediator Nils Dalseide said there was no point in even submitting a compromise proposal at this point.
According to Akademikerne, the heart of conflict has to do with working hours.
“Spekter’s working time arrangements are irresponsible – both for the workers and for patient safety. The doctors’ exceptions from the Working Environment Act [Arbeidsmiljøloven] is already extensive enough. That’s why we are on strike,” chief negotiator Rune Frøyland said.
He added that the strike will continue until there is a “collective protection against irresponsible business hours.”
Spekter counters that it is not requiring changes to doctors' working hours, but merely seeking more flexibility in order to plan how to use resources in the best way possible.
The employers’ association said in a statement that the doctors “have made it very difficult for hospitals to plan solutions for patients that are in line with the new patient rights ordered by the political authorities, the expected population increases and the implementation of new specialist training”.
“Hospitals will now organize their operations so that the strike affects patients to the least degree possible,” the statement added.