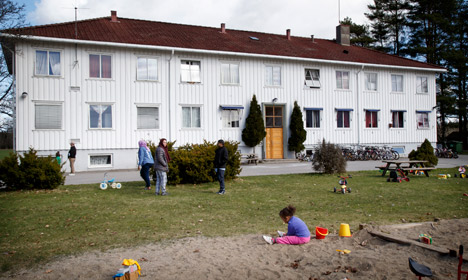 File photo of the Bjørnebekk asylum center in Ås. Photo: Heiko Junge/NTB Scanpix
The newspaper looked at 2016 statistics from the European Asylum Support Office (EASO) and the  Norwegian Directorate of Immigration (UDI) and found major differences in asylum approval rates.
While EASO showed that an average of 60 percent of Iraqis and 47 percent of Afghans who sought asylum between January and July were approved, those numbers are at just ten percent and 25 percent respectively in Norway.
See also: Norway closes Arctic asylum centre as numbers plunge
In 2015, 82 percent of Afghans and 35 percent of Iraqis were approved for asylum in Norway, but with the country having changed practice and implemented tougher asylum rules, UDI now views Afghanistan and parts of Iraq as safe enough to send aspiring asylums back.
UDI head Frode Forfang told Klassekampen that Norway was in part making up for its previous too-generous, pointing out that the 82 percent approval for Afghans in 2015 was far over the 58 percent average in the rest of Europe.
A total of 31,145 people applied for asylum in Norway in 2015, nearly 20,000 more than in the previous year. UDI originally anticipated that as many as 60,000 would arrive in 2016 but has now lowered that estimate to 10,000. News agency NTB reported last week that the number could be as low as 3,500.
UDI said in June that asylum numbers had plummeted by 95 percent in the first four months of 2016.
Norway, a country of 5.2 million, is not a member of the EU, but it is a member of Europe's Schengen zone, whose internal borders have been scrapped.