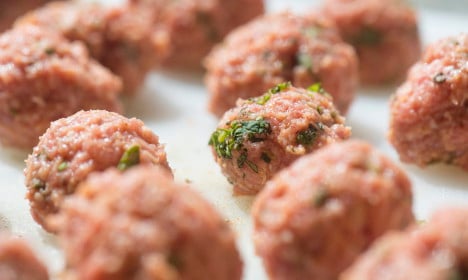 Definitely not the meatballs in question. Photo: Leif R Jansson/TT

Claus Jørstad from Alta in northern Norway has a bad knee. In an effort to combat the discomfort it gives him while washing, he bought a stool from Ikea (the Marius model, pictured below) to use as a seat while taking a shower.

Not a bad idea, in principle. What he failed to take into consideration was the number of round holes in the top of the stool, as well as the transformative effects that changes in temperature can have on the human body.

The result was an uncomfortable experience to say the least. In a Facebook post directed towards Ikea Norway, Jørstad provides a detailed account of how, while sitting on the stool in the shower, his genitals (which he refers to as his ‘skipper and two sailors’) got into a spot of bother.

“As you can imagine, the skipper is the captain down there, and the sailors are the two nuts that dangle. But then, you are Swedish, and I know that you don’t like direct descriptions of genitals, so I will call them the skipper and his sailors,” he clarifies.

The elaborate metaphor continues, but to cut a long story short, one of Jørstad’s “sailors” eventually “slipped unnoticed” down one of the holes in the stool. By the time he realized, the hot temperature in the shower has made his “sailor” expand.

The Norwegian became aware of the problem when he stood up and discovered a combination of pain and a Marius stool dangling from his lower half. Removing the piece of furniture by force was not an option, and Jørstad eventually concluded that cold water would do the trick. After a bit of waiting (and freezing), he was finally put out of his misery.

The maritime metaphor enthusiast closes his Facebook post to Ikea with a punch line: “is the stool available in yellow?”

The anecdote has been liked over 24,000 times, achieved more than 11,000 shares, and attracted upwards of 5000 comments since it was posted on Thursday.

The best of the replies came from Ikea, who decided to take Jørstad’s sailing iconography and run with it:

“Hey Claus. We recommend that you take the stool out of the shower (…) or that you sit on it with the right uniform on and in the right setting. If you choose to keep it in the shower, make sure you are well dressed for your next sea excursion,” they advised.

The moral of the story? Dress appropriately if you sit on a stool in the shower. Or at least check for holes first.